Share All sharing options for: GLB PaD: Sodding the outfield at Petco Park 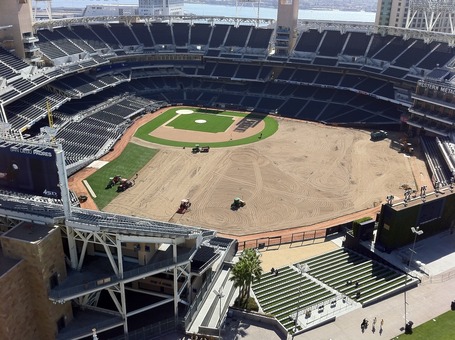 Today's un-Hipstamatic'd photo brought to you by thenerdhater, who teaches us that sometimes it's OK for a photograph to look like it was taken with a modern camera.

They're tearing out the grass at Petco Park. No word yet on whether or not they're planning on putting the grass back or if they're anticipating leaving it open and sandy. I am reminded of playing baseball on dirt fields during my school days. I imagine those non-grassy fields would like to have a look at the non-grassy version of Petco and say stuff like, "How does it feel?" and "Nice dust circles". And then I imagine that naked Petco would feel very embarrassed at having so much of its dirt exposed.

Incidentally, I'd like to see a game played on a field like that. It would be dusty.