SlashLine: Retrosheet on your iPhone

Share All sharing options for: SlashLine: Retrosheet on your iPhone 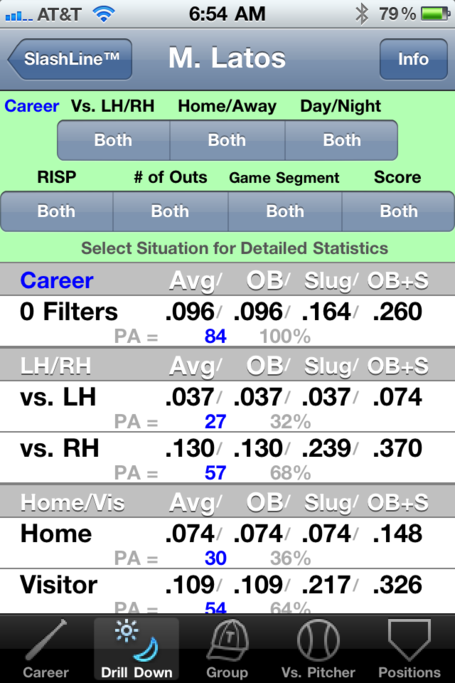 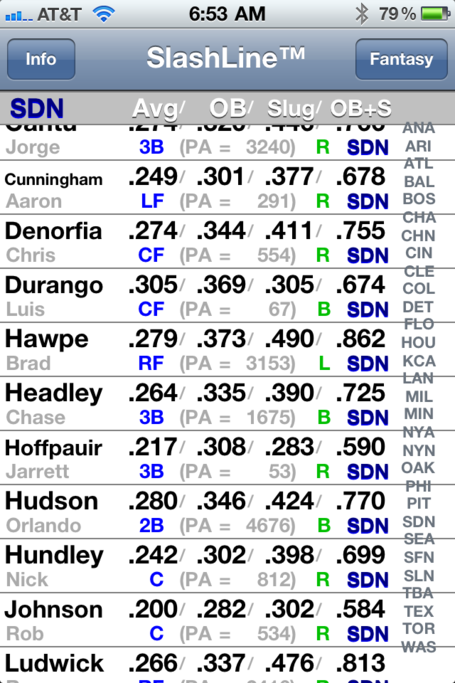 I love that there is such a thing as "apps" on your "mobile" and that the "apps" can be stuff that people don't "normally" care about, but like you don't have to be a "pro" to make stuff that people only care "about" on occasion. All that's to say that I'm really enjoying the SlashLine app for iPhone. I'm not even that big of a stat head compared to some of you nerds, but I'm thinking it will be very useful in Spring Training when somebody figures out that I'm a baseball blogger and then asks me all kinds of f_cking questions that I don't know the answer to, but I have to pretend like I know because I like baseball and computers and therefore I must be a nerd.
I asked Rex, the developer of SlashLine and Royals Fan Since '69, to answer a few questions just to give people some insights into his creation:

What led you to developing SlashLine?

1)  I thought that fans at games or watching on TV might enjoy quick access to deep situational data.   I knew I would.

3)  The fantasy rankings are a fairly simple add-on.  I haven't quite figured out how best to support the fantasy market, but this is a start.

How do you picture SlashLine being used? Who is this app really for?

First, it's for fans at the game who might quickly be able to break down a situation to figure out the optimal strategy. Maybe it's a pipe dream, but potentially the bench coach/manager might find it useful.

Second, fans who might just enjoy poring over stats in an easily accessible fashion.

Third, fantasy, though this might turn out to see the heaviest use.

Are you an iPhone app developer by trade?

No, I am an amateur (I have since built an Options Pricing Models App:  www.optionpricingmodels.net - I'm a CFA charterholder), though I do have a fairly strong algorithm/math background and can code a little.

Are you considering any enhancements for the app? Anything you want to leak for the next release?

If SlashLine gets a wide following, adding an analogous pitching module would be fairly straightforward...  Defense stats would also be possible.  Home plate umpire results (e.g. % of called strikes, runs per game, etc...)  A much larger project, but possible, is to support fantasy...for example, it would be possible to track projected pitching matchups and suggest optimal lineups, although this is also a function of the opposition's lineup in many leagues, so it gets a little tricky.  I haven't put a ton of thought into this, but I probably will as the app seems to be catching on.

Any other baseball related apps in the works?

Here would be my top improvements just off-hand, based on my using it on an iPhone 4:

1. The ability to directly compare players

3. Recent "search" saves in a history. The last 50 or so players or sheets that you viewed. You might also be able to get away with a "bookmark" feature to make this part more functional.

All in all, a great start and a very functional app. It's free and Rex is responsive to suggestions so it's perfect for our more opinionated members of the Gaslamp Ball Nerd Corps.