Share All sharing options for: Padres Will Venable and Nick Hundley at Target for Junior Seau's Foundation event "Shop with a Jock"

I walked into the Mission Valley's Target tonight to get some unmentionables and practically bumped into Padres catcher Nick Hundley. It was one of those weird moments where things didn't seem real. Then Will Venable came out of the same aisle and I muttered to myself "Sh*t just got real".

I shook Hundley's hand saying "I'm a big fan...", I squinted at his name tag and finished my sentence "...Nick... Hund-ley." Hundley was real friendly and with a big smile on his face said something like "Thanks! I appreciate that!" They were both pushing carts and were with their significant other and a kid. It looked to be a charity event where they were helping the kids shop for presents for their families.

I fumbled for my phone and took this picture. It wasn't much but good enough for the blog.. 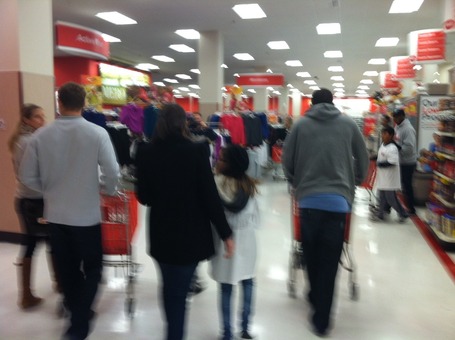 It was then that hundreds of other athletes poured out of Target's back room with a kid in tow. There were some Chargers and a lot of college athletes from around San Diego. I saw a sign on the front of one of the carts that said "Junior Seau Foundation". I also eavesdropped on a few conversations and like a detective I slowly started putting the pieces of the puzzle together. Junior Seau's Foundation and Target were sponsoring a shopping spree for kids, it's called "Shop with a Jock". The catch is the children aren't shopping for themselves but for their loved ones.

I started tweeting away in the toilet paper aisle (I wasn't buying TP, just hiding there) when I saw Lady Jane Mitchell walk by. I said hi and she asked if I retweeted her this week. I thought for a second, "Maybe?" She described the tweet and I said "I think that was Friarhood." I wasn't sure but I blamed him anyway. She told me to use the hash tag #ShopJock in my tweets. She then asked if I thought she was doing a good job with her social media. I told her she was, but really who am I to say? I was tweeting while hiding in an aisle full of toilet paper.

Target went nuts after that. There were athletes everywhere. I thought I should probably get some better pictures and just stood around with the rest of the media for a while at the bottom of the escalator waiting for Hundley and Venable to come back downstairs. 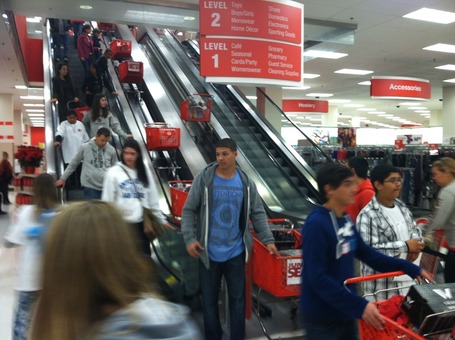 I didn't approach Will Venable. He makes me nervous. 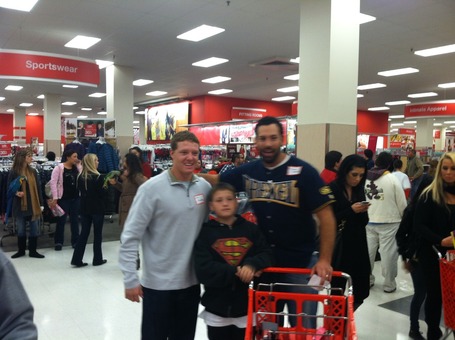 I looked to my left and saw former Charger and current broadcaster Hank Bauer with a parrot sitting on his bald head. I'm not sure why I didn't take a picture, I think I was just too weirded out by the scene.

I got a tweet from Gaslamp Ballers @Daye619 and @Katchik99. They were at Target too and we met up. We talked about how surreal it is to come into Target to buy milk and then be caught in the whirlwind of a shopping spree with athletes. They told me that the voice making announcements over the PA the entire time was none other than Seau himself. He was sitting on the check out counter. I never did see him, but it was great seeing those two.

As things started to die down I got back to shopping. It was really uneventful as I collected my purchases. I considered sticking the bill to Seau but thought better of it. After all it is the Holiday Season.