Community, it's not just a sitcom on NBC. My New Years resolution for the blog is to come up with more community activities. You know, get more people involved and Gaslamp Ballin'.

Since no one volunteered to watch the entire Jerry Maguire movie to find Padres CEO Jeff Moorad's cameo, we'll watch it as a community.

We'll need 10 volunteers to watch 12 minutes and 50 second segments of the movie. It sounds easy enough, but you'll have to be on high alert and fight off the urge to gaze longingly at Tom Cruise. It's all about watching the characters in the background. Moorad may or may not have a beard. He may be playing a waitress or he could be hiding in plain sight as a Tom Cruise stunt double. Focus will be the key.

When you volunteer, just leave a comment and claim a part. After you watch the segment let us know if you saw him or suspect that you might have seen him.

If no one volunteers, I'm going to start volunteering people.

Gaslamp Baller Star_Hanger found him! Moorad and his neatly trimmed beard were in the bachelor party scene. 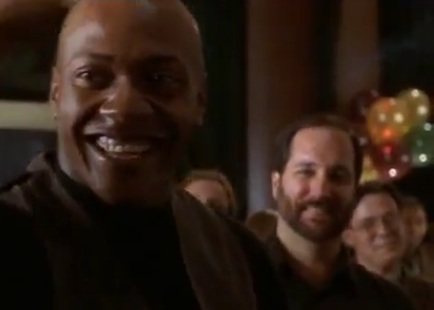