Share All sharing options for: Is Tony Gwynn "Captain Video"?

If you read Baseball Reference, Wikipedia or any other number of baseball websites you'll see that Tony Gwynn has two nicknames listed.

Captain Video you say? I know the story like the rest of you, Gwynn taped games on his Video Cassette Recorder and carried them around on road trips studying them to dissect his swing and study pitchers. It was one of the secrets to his success.

While a couple of his teammates might have called him "Captain Video" early on to rag on him for carrying a VCR under his arm rather than a groupie, the name seems really forced now. I imagine someone stuck the nickname in Wikipedia and then everyone else copied it from there.

I lived in San Diego throughout his entire career and never heard him referred to as "Captain Video" in newspapers, radio or TV. "Captain Video does again!" was never a headline in the sports section. I'd be willing to bet that most people had never heard of it. Can it really be considered a legitimate nickname if no one ever used it?

"Mr. Padre" I can understand. Just about every team has their own Mister and he is certainly ours. There's no better evidence that his "Mr. Padre" nickname is accurate and widely known than Google.

It wasn't until I saw this signed ball that I realized that Gwynn had acknowledged the nickname at least once. I guess if he's willing to scribble the nickname on a baseball and sign it than it's legit enough. 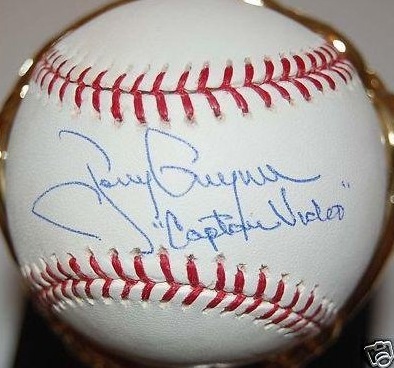