The End of the San Diego Padres Shampoo Bottle Logo

Share All sharing options for: The End of the San Diego Padres Shampoo Bottle Logo 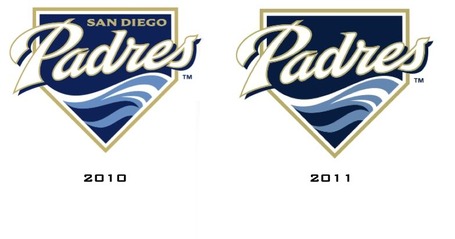 Yep... There she is in all her glory. Notice the "San Diego" in the 2010 version, a font which was previously exclusive to a Pantene bottle or a bottle of Garnier Fructis. The wave effect, ripped directly off of a bottle of Suave. That combined with the alliterative nature of Padres, Pert, Protane and Pantene... Positively Perfect!

Except that I hated it. I mean, look at the images above. Even San Diego itself seemed to run away from the logo like, "Hey guys... I'm just gonna stand over here... and ummm... TAXI!!! TAXIIIIIIII!!!!"

So I wonder how the original designer felt about that effort. It was like, in trying so hard to avoid the 1970's, they completely focused on the fact that everybody had a lot of hair in that decade and then decided that the opposite of "hair" is "shampoo", when obviously that's insane.

So they've abandoned the shampoo bottle logo and reworked it into this:

So they took the homeplate outline, the most masculine thing in the previous logo, and they turned it into the outline of a Superman crest, thereby making it even more masculine. ROWR.

Now, instead of the bottom of the logo slowly filling with wave and white wash, a shout out to 1969 is thrown in there all bold and military logo like. Like a banner or a Swatch watch or something. I'm very glad the wave is gone. It was thrown in like a latent sexist symbol of washing luxurious hair in the 1980's. The thing seemed to rumble in a deep, soul singer's voice, "This one's... for the ladies".

The drop shadow that once was used to give the "Padres" some pop has fled the scene, embarrassed for having tried to escape its flat fate, like a 3D pie-chart.

And, perhaps most prominently, the skyline of Petco Park hovers over the word Padres. A proud reminder that we have a ballpark that is more than capable of hosting a baseball game and is the perfect venue for your next rock concert.

Being firmly in the camp of hating the shampoo bottle logo essentially from the beginning, I'm glad that the Padres have moved away from it. From my understanding, this version of the logo is now tertiary, giving way to the interlocing SD and the Swingin' Friar so we may not see it in a lot of places.

This is a good thing, because, for as much as I appreciate the changes, there are little things that kinda stick out to me. I think the skyline was well done, but feels a little bit busy for my tastes. The wave is not completely abandoned as the one swath of underline still swooshes through like imitation Nike's in Korea. The script font in general is still there.

Still, as far as changes go, this one will be seen minimally and the previous one will now be seen not at all. Or, maybe, like 20 years from now when crazy kids totally grok with 1980's shampoo bottles and the director of marketing is then forced to reintroduce the shampoo bottle to satisfy the demands of their new younger, edgier market. Cest la vie.