Padres will supply 10,000 uniforms to local Little League. I will supply 3 reasons I love the idea.

Share All sharing options for: Padres will supply 10,000 uniforms to local Little League. I will supply 3 reasons I love the idea.

What seems to be lost in the new uniform announcement is what I feel is the best public outreach program to come out of the Padres organization in quite some time. It's called the Padres Little League Initiative. The team is donating 10,000 Little League uniforms to 4 districts in San Diego County.

I'm really excited about this program for a few reasons.

First, Little League is usually a gateway to becoming a fan of Major League Baseball. Many kids will choose their favorite team based on their corresponding Little League team. This leads to kids wearing Cardinals, Yankees, Cubs and any number of other team hats around San Diego. I've asked some of those kids on occasion why they are supporting and rooting for an opposing team when they are from San Diego. Almost always it's for no other reason than their Little League affiliation.

I never played Little League myself, but Jonny was telling me that in his League growing up in the 80's that they didn't even have a team named after the Padres. No one wanted to be associated with them, probably the result of some lack luster Padres clubs and transplanted Little League coaches and administrators. 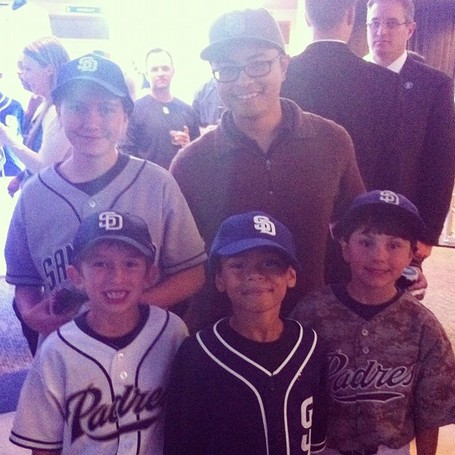 With the Padres reaching out to kids between the ages of 4-12 and saturating the leagues with Padres jerseys and caps they are laying a foundation for future Padres fans that we need desperately. Just as important they are instilling a sense of civic pride.

Second, the Padres are introducing these kids to Padres jerseys and colors that are unfamiliar to them.

I've been working on a theory and trying to create a formula to figure out how a Padres uniform becomes your favorite. It factors in parameters such as when you were first introduced to the team, the uniforms worn when you were 10 years old and all of this in relation to the Padres nearest championship club. I haven't quite figured it out yet.

In any case even the oldest kid in these Leagues at the age of 12 have no memory of seeing a team earlier than 2003. They only know Blue, White, Sand and Gray. Dull colors, but their favorites because it's all they know.

In a way, I'm hoping that this Little League Initiative backfires on the Padres front office. They've made it quite clear that they like the current colors and fonts. I'm hoping that these Little League jerseys and caps will spark a new interest in returning to Brown, Gold and Orange. They'll no longer be thought of uniforms from a bygone era, but once again become relevant, and a youth movement will transform a vocal minority into a majority.

Finally, I just think it's cool that almost every team in the League will be named the Padres. On a given weekend you could have the '78 Padres facing the '92 Padres or the '69 Away Padres playing the '12 Camo Padres. We were told that Little League teams are already fighting over which jerseys they'll get. That's the kind of excitement you probably don't see a whole lot on the Little League level.

While Padres President and COO Tom Garfinkel was speaking to our group last night, I started to zone out. I interrupted him talking about Minor League Prospects and told him that I may want to become a Little League Coach in an effort to get one of those throwback uniforms. He said something to the effect of, "I'll get you one of those jerseys if it means you don't corrupt our city's youth." I laughed it off, but I think he was serious, which means he really does care about San Diego and so do the Padres.