‎11 teams this season had a payroll of over $100 million dollars...only 2 are still playing (Phillies & Tigers).

I think I get what Drama's saying... Basically, the big question is if spending over $100 million is worth having a 15% better chance of going deep in the postseason in any given year (assuming those numbers are indicative of other years). I think I get it, but I'm gonna go ahead and say that I disagree with him, especially now that he's a Diamondbacks fan: 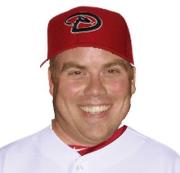