As promised I watched Dirty Soap last night. One of the plot lines was about Nadia being invited to sing the National Anthem at a Padres game. Apparently she had a role on Days of our Lives playing a young opera singer named Chloe and is an accomplished singer in her own right.

Nadia had only sung the National Anthem once before. E! showed a flashback of her singing at Fenway Park and she skipped from "Oh, say, can you see" to "And the rockets' red glare".

Shortly after she started the song, Bjorlin messed up the lyrics, causing some fans to boo. She blames the sound delay. "I made the mistake of listening to myself. Then my mind went blank,’’ she said. In the end, Bjorlin recovered the performance and fans cheered her on as she finished "The Star-Spangled Banner.’’ Bjorlin said her hosts in Boston asked her to return again. "I said, ‘for a re-do?’ ’’

So that's the background. In the episode her agent calls and tells her the San Diego Padres want her to sing the National Anthem. He pauses and explains that they are a Major League Baseball team. She replies sarcastically "Oh joy, that's like my worst nightmare." She continues "I can't say that I'm thrilled though I'm sure some people would be." Then as if she wasn't clear enough she said "I'm not excited at all".

So then her Soap Star boyfriend with perfectly groomed beard stubble and her make-up caked mother have to convince her to sing the song and face her fears. Her mother convinces her that her deceased father will help her from the great beyond and also hires her a vocal coach who speaks only in sexual innuendo.

The vocal coach comes off as a total perve. "I want you to drop your jaw more. I'm going to give you a singer's secret. When you hit the big notes squeeze your butt. It's a kegel exercise."

When I told Dex about this part and asked him how to spell "kegel" he said "The kegel exercise is the pee muscles. It's not your butt. Who pees out their butt? Answer: gay vocal coach."

So then Nadia and her family get stuck in traffic and have to run into Petco Park. That's when we meet our old friend Pad Squad Loxie. Nadia is gasping for air, and asks "Are we late?" Loxie replies as calmly as she can while sprinting for the tunnel, "We have plenty of time." Nadia asks how much time. Loxie replies "About 45 seconds." Like she said, plenty of time. 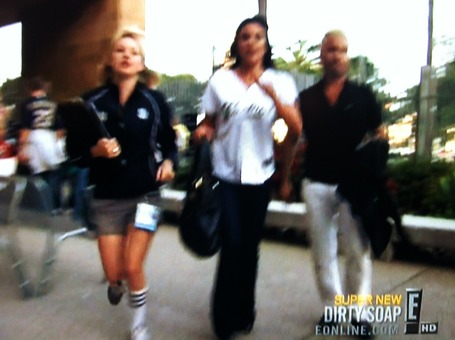 Nadia explains what's at stake. "I did mess up before so there is a lot of pressure to redeem myself." She continues "Singing the National Anthem is my biggest fear. Psychologically I'm not sure I can handle it."

Once on the field Nadia narrates the scene. "As I'm standing there in front of 100 thousand people the only thing I can hear is my own heart beating in my throat." The attendance was probably closer to 20 thousand but seriously who's counting?

In the end the Star Spangled Banner goes off without a hitch thanks to kegel exercises and a ghost.