Share All sharing options for: Storytime from the Padres Town Hall Meeting 2011

Jon and I went to the Padres Town Hall Meeting yesterday.  The event started at 6pm so Jon drove over and picked me up at 5pm.  Maybe that'd be a little bit too early for some people to get to the ballpark, but Jon wanted plenty of time to go to a sporting goods store to buy an official MLB baseball in case we ran into Trevor Hoffman.  At the previous days Awards Banquet we heard Hoffman would be in attendance and Jon wanted to be prepared.

Sure enough, like clock work, Jon was there at my door as soon as the bell tolled the 5th time.  That's what's nice about Jon, you can count on him, he's dependable.  If Jon says he's going to be some place at a certain time, he will be.  He's very punctual. Jon and I have known each other since the 6th grade and he's always been that way.

In fact when Jon was married soon after the end of the 2010 baseball season and I was honored to be the best man in his wedding. The customary best man speech focused on what a good friend Jon has been to us all and how he's always been someone I could rely on.  It's a good quality for a friend and a husband, I said.

Dex has known Jon for over a decade. They too are dear friends and so he was also at the wedding.  Though some might mistakenly think Dex is "always"  late, he was over an hour late to Jon's wedding and missed the entire ceremony. But hey, he arrived ten minutes before they actually served dinner so what harm was done?

Anyway....we arrived at the ballpark and soon found ourselves in the company of, the Voice of the Padres, Jerry Coleman.  We asked him how many games he'll be calling this year.  He told us that he'd probably end up doing about 20 home games but his broadcast schedule hasn't been finalized yet.  We asked if he planned on traveling to San Francisco (his hometown) or New York (his home for years when he played for the Yankees) and he said he probably won't go to New York again.  The series is in the middle of a long road trip and he'd have to travel by himself across country which wouldn't be ideal.  He said there is a greater likelihood that he'd travel to San Francisco since it's only an hour flight away.

Next up we talked to Ted Leitner.  I told him that we're going to start a grassroots campaign to get him elected into the Padres Hall of Fame.  I told him they should have given him the honor  on his 30th anniversary, but not to worry because we'd take care of everything and he'd soon find himself among Padres immortals.  He laughed and said he appreciated that.  We talked about Aztec Basketball too and we agreed that his past year of broadcasting has been his best since he's had to the pleasure of announcing such successful teams.

Trevor Hoffman was also at the ballpark as promised and we introduced ourselves and then proceeded to have a Chris Farley style conversation with him.  "You're like the best closer ever."  "Thanks."  "You remember when you saved 53 games in '98?" "Yeah."  "That was awesome."  After that he was forced to carry the conversation because we were super awkward and in awe of him.  Jon got his ball signed.

Trevor was soon saved from us.  We snuck down to the front row.  It was time for the Padres Leaderships Opening Statements and the Q&A portion of the night.  The main festivities if you will...

Jeff Moorad started with his statements. He talked about the goals of the Padres, mostly about winning, bringing an All-Star Game to San Diego and running a fiscally responsible ball club.  He also said a few words about Adrian Gonzalez and how even though he was traded to the Red Sox he's still a member of the Padres family, which is why he continues to work out in the Padres facilities.  Jed Hoyer later expanded on the reasons why it was necessary to trade Gonzalez.

Trevor Hoffman was introduced to much applause.  He talked about his eagerness to learn about baseball outside of being a player.  Bud Black said that Hoffman would be in uniform during Spring Training to help young players. 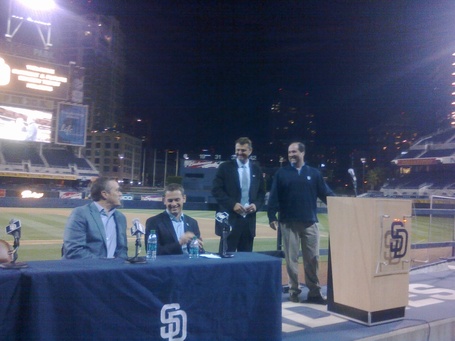 Orlando Hudson was also in attendance with his wife and he spoke to the crowd.  It was later revealed that he flew in from South Carolina just for this week's events and was flying back tonight on a red eye.  He is committed to this team! 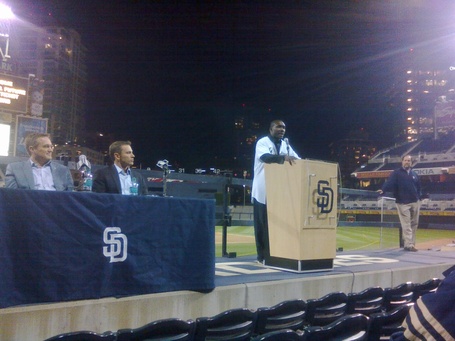 Tom Garfinkel announced that the Padres would have a Bud Black bobble head night this season.  He also introduced a bunch of the young prospects in the system.  They came out wearing the new jerseys that were released this week. 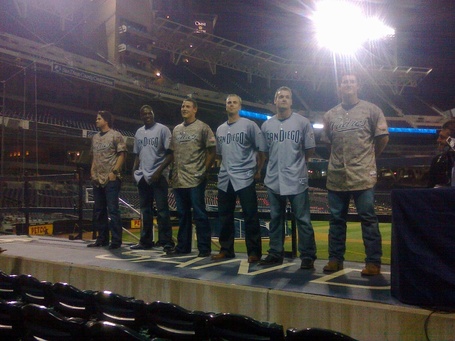 Bud Black spoke too.  Jon and I were giggly like lunatics throughout.  We're huge Buddy Black fans and I've recently really started enjoying his speeches and interviews.  There's something about the cadence of his speech that is intoxicating.

There were some Q&A questions but nothing too interesting was asked.  Nothing as inflammatory as last year.  At one point a fan stood up and asked a question.  He was wearing a huge Padres winter jacket, like the Gortex jacket that George Costanza wore in an episode of Seinfeld.  Garfinkel joked that if the jacket was white instead of black he'd look like the Michelin Man.  Jon and I laughed, but the crowd was silent save for a few crickets.  Mentor's jokes have been bombing recently much to our delight.

After the questions the crowd was invited to walk out onto the outfield.  We saw Friarhood Steve out there and exchanged handshakes and greetings.

In shallow right field we met up with Gaslamp Ballers John Gennaro (Bolts from the Blue), jodes0405, justdave, crazy_charisma and sdsuaztec4.  I've met sdsuaztec4 twice now and each time he looks so bored by me.  You know when you're talking to someone and they keep looking around seeing if there might be someone more interesting to talk to, like that.

I gave John G. the once over with my eyes, doing a little memorizing job for later when I noticed a tattoo on his arm.  It was a tattoo of a quill dipping in an inkwell.  I asked him what that was all about.  As the SBNation Chargers Blogger he said it was a reminder for him to write more often.  I guess SBNation is really pressuring him to write more and more.  I thought to myself that Dex needs to get the same tattoo, because of his ever sporadic blogging.

As the night drew to a close we had a moment to talk to Padres President/COO Tom Garfinkel.  I introduced him to the Gaslamp Ballers in attendance.  He asked for their screen names and said he recognized them from their comments on the the site.  John G. reminisced about Mentor's first appearance on Gaslamp Ball and how he traded Austin Power's quotes with him in the comments section, which set Garfinkel off.  He recited from memory the entire Dr. Evil monologue from Austin Powers: International Man of Mystery.

Finally with the monologue over, Jon asked him if the Padres would continue to play Macy Gray's "Beauty in the World" after Padres victories this upcoming season.  Garfinkel thought they'd probably try to choose a new song, but nothing by Bob Dylan.  Jon told him how he closed out his wedding with the Macy Gray song because of the Padres.  Garfinkel already knew.

That's all for now, this post is getting really long and Dex is probably about to post the second part to his post any minute now, so I'll continue this story another time.