I'm so glad the Padres are finally changing their camouflage uniforms. As you know, the team has been wearing camouflage for years during Sunday home games as a tribute to the military. The only problem is that the camouflage they've worn in years past looks like something you'd see in a GI Joe cartoon or on a toy instead of in combat. It was embarrassing.

On Tuesday, during the Military Appreciation Luncheon kicking off the Farmers Open at Torrey Pines, the Padres will introduce a new design — based on the digitally designed Marine desert brown camouflage — to the camouflage uniforms they wear for Sunday home games.

Before I forget, I'd also like to wish Jack Ensch a happy retirement. I've never met him but he was a great help when I was compiling a list of Padres Military Veterans late last year.

Anyway, using the Marine Pattern Digital Desert Camouflage will give the uniforms a much more authentic look. It appears they'll have new caps too. I wonder though which pants they will wear with the new jersey. Their only option might be white. It's been rumored that the club is moving away from the Sand colored uniforms that might have looked good with the desert camouflage.

We haven't seen the new jersey yet, but here's how I would have designed it. I've been saying they should move to digital camouflage for years and I really like the MARPAT Desert Camouflage, but I'd take the military influence a step further. On a Marines' blouse they have a black stamp of the Marine Corps Emblem on their left breast pocket. What if instead of the Padres script across the front in green, you replaced it with the Padres logo, an interlocking SD, stamped in black? It would be kind of like some of the old jerseys that just had an SD on them. Also instead of their names in green on the back, you could write their names similar to the Marine Corps name tapes that Marines wear on their uniforms. That'd be sick, yo. 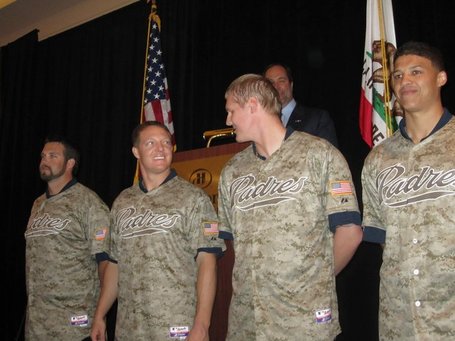 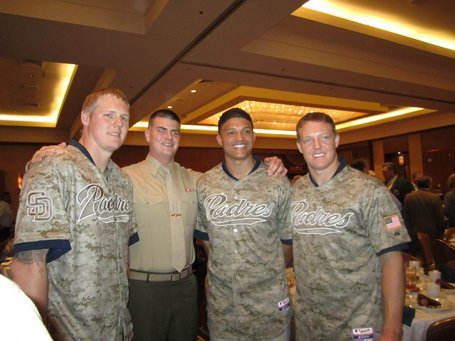