"Do you thinks the san diego padres will make it to the play offs?"

Share All sharing options for: "Do you thinks the san diego padres will make it to the play offs?"

Hi.  I write the Padres blog Gaslamp Ball, but I fully admit that my overall knowledge of the base ball is lacking in many areas.  That's why when I have a question I go to Yahoo! Answers.

Today I asked myself, "Do you thinks the san diego padres will make it to the play offs?"  When I went to Yahoo! Answers someone had already asked the question and fortunately a Red Sox fan was there with the answer.  It was my lucky day because Red Sox fans have all the answers. 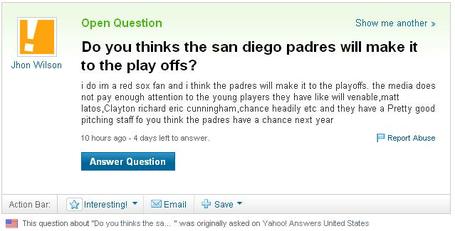 I had forgotten about "eric cunningham, chance headily etc."  That made me feel better, because the Padres could compete this year if a Sox fan says so.

On a side note, without fail every person from Boston I've ever met has told me they are from Boston in the first few minutes of meeting them.  You don't get that from people from other cities.  You might go months before finding out that your friend or co-worker was born in Boca Raton.  It appears this primal need to tell you they're from Boston goes for those people on the internet too.  They need to preface everything they say with "As a Red Sox fan..."  That way you know you're dealing with an expert.

So we get this guy who chimes in:

As a Red Sox fan you should realize that Adrian Gonzalez is no longer on the Padres.

It takes an expert Red Sox fan to tell a Padres fan that they should realize that Adrian Gonzalez is no longer on the Padres, because our local papers don't have the latest hot stove news.

I think I'm going to make this a new segment on Gaslamp Ball.  I'll periodically ask an open ended and generic Padres question on Yahoo! Answers that Red Sox fans will find irresistible.  It'll be a honeypot to catch and collect knowledge from Red Sox fans, you know, for science.