The fact that the Padres are in the midst of their longest losing streak of the year doesn't worry me as much as that they entered a playoff type series with the Phillies and were unceremoniously swept. It reminded me that this spectacular season could end just as quickly for the Padres if it were the playoffs. It'd be like '96 season all over again, except maybe more disappointing.

The Padres even started their three best pitchers, Latos, Garland and Richard like they might in the playoffs, but were unable to even take one game. For the most part the Padres played good baseball (except Sunday), but it is a legitimate concern that their offense never took a lead throughout the entire series.

Anyway the Padres finish the week 2-4. Padres players say they aren't worried. They still hold a 5 game lead over San Francisco and appear to be playoff bound. I'm not really worried so much about San Francisco either, I'm more worried about how we match up against other playoff caliber teams.

So go vote your true feelings in this weeks poll. Also take note of SBNation's confidence poll widget placed directly under the Gaslamp Ball logo on the front page, vote there too.

The rules are simple. On a scale of 0 to 10, 0 being no confidence at all, 10 being absolute confidence, How confident are you in the San Diego Padres organization?

"Confidence" is just about anything you want to interpret it as. The front office, the future prospects, the play on the field, the park, etc etc etc

A bunch of Confidence Poll Graphs after the jump: 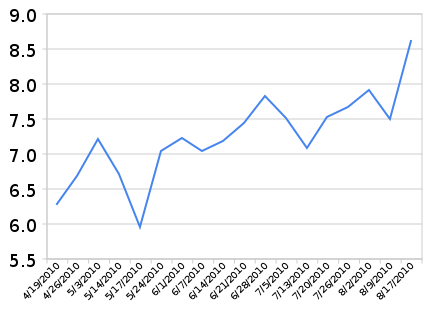 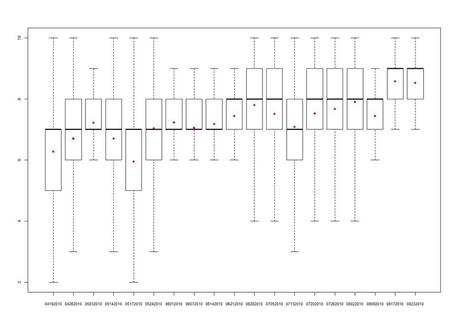 Here’s a boxplot of our confidence polls. For anyone unfamiliar with a boxplot:
Red dot – mean
Bold black line – median
Rectangular box – 25th to 75th percentiles
The ‘whiskers’ – entends away from the rectangular box (known as the interquartile range) up to 1.5 the interquartile range on either side. Points outside of this are considered ‘outliers’. 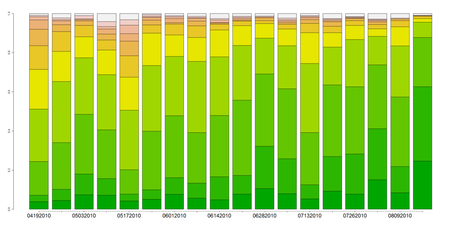