It seems like the hot topic of the day following yesterday's win is the attendance figure of only 20,000. This is a winning team. It's a first place. It has the best record in the NL. They are coming home after a very successful and long roadtrip. Why aren't fan showing up to "support the team"? On the Scott and BR show this morning they even asked Adrian Gonzalez about it and he stated that he was disappointed. What's going on here? 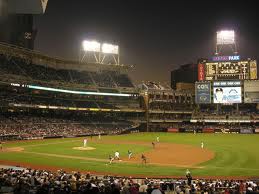 One point that comes up is that the Padres were only playing the Diamondbacks, a last place team. The counterargument is that our fans should be showing to watch the Padres and not the opposing team. My friend would even say that he'd rather see the Padres play a bottom dwelling team so that he has a better chance of seeing a win. However, just judging by the commenters on Gaslamp Ball its pretty obvious that many of us our revving up for the Phillies series this weekend and, while saying we're not and still tuning into the games, are really looking beyond this series with the lowly Diamondbacks.

Another point is something about kids returning to school. I don't know how much I can speak to this point without knowing the typical demographics of a weekday crowd in San Diego. Is it really that reliant on families to show up? A sellout is 40,000 and a decent turnout could be 30,0000. If school wasn't starting up could we really expect 10,000-20,0000 fans to show up on a Tuesday night? I have a hard time believing that, but I won't discount that it could play a part.

A logical leap could be that the people of San Diego don't care. Personally, just from the conversations I have with non-die-hards in San Diego I can tell that this team does excite people. People who casually follow the team are not indifferent to the successes the Padres are having. There's water cooler talk. There's people reading more Padres articles in the paper. Many are even watching games on TV that they would not have were the Padres season going differently.

When I was listening to that aforementioned Adrian Gonzalez interview he mentioned that they just came from Milwaukee where that team is not in contention, but drew near sellouts each night. I was in Milwaukee and that city loves a tailgate (hours upon hours of tailgating; tailgating in a thunderstorm tailgating), which is something you do on weekends and not weekdays. So, I think Adrian is being ignorant of context right there. The other thing is that Milwaukee was excited about their team going into the season. This is important and I'll tell you why.

Teams that have sudden success do not have their largest boost in ticket sales for the current season. They have it the following season. Part of that is about the hype for the team and part of it is about people trying to secure playoff tickets. Both of those factors result in large season ticket sales numbers. Season tickets sales are key. They provide a base attendance for every game. Its a lot easier to draw 30,0000 for a weekday game when a large number of those tickets were bought in the offseason. Just in my own personal experience, at this point in the season I'm fairly set in my ways. I haven't gone to many weekday games and I have a number of tickets for upcoming weekend series'. I'm not going to suddenly start buying up weekday tickets because the team is winning and I suspect many people aren't ready to just start picking up games left and right. But, without that season ticketholder base you are reliant on people suddenly picking up tickets by the bucketload in order to get to 30,000 and 40,0000 and that's just not going to happen. At least not on weekdays when people aren't ready to stay at the park until 10 pm, get home later than that and have to be at work the next day. It's just easier to follow the team you're excited about from your home like you've been doing all season.

As for this weekend's series with the Phillies, well, I expect the numbers to big. Otherwise, I'll be disappointed just like our slugging first baseman.