We took the "L" over to Wrigley Field and arrived about 20 minutes before game time.  Walking through the heart of enemy territory we saw another Padres fan wearing a USC hat and introduced ourselves as both Padre and Trojan fans.  Turns out the guy was Matt Grootegoed's dad.  He told us he was a huge Padres fan and had just flown in specifically for the game. 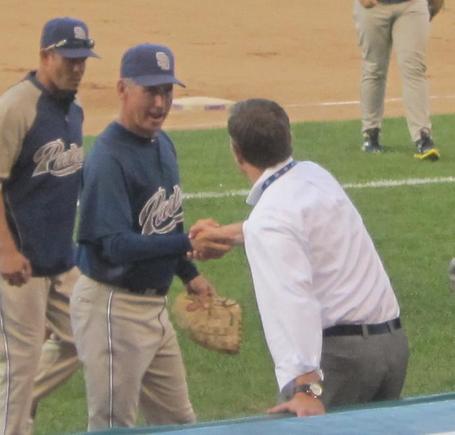 With the game starting soon we rushed to the lower field level seats to take some pictures of the Padres finishing up their batting practice.  That's when I noticed, about 50 yards away, leaning against the Padres dugout was Mentor.  I tried to patiently wait for the right opportunity to say hello but instead surprised myself by screaming out his name in a high pitched voice.  He turned and gave a half hearted wave, like one you might give if you're hanging with the cool kids at summer camp and your mother yells for you to not forget to change your underwears.

It was then that our eyes detected a gathering of fans around a Padres player signing autographs, so we decided to go over for a closer look.  It was the Blonde Bazooka, Mat Latos.  By the time we arrived he was headed back to the dugout, but I finally had the opportunity to say hello to Dallas, famed twitter-er and Latos's fiance.  She was a delight.

On our way back to our seats we ran into Mentor.  He was standing atop a step and combined with his great height he towered above us.  My knees wobbled and my neck strained to look him in the eye.  It was like looking at the Willis Tower from the street below... only more majestic.  He shook our hands and offered two batting practice balls.  He suggested that I give one to a young Padres fan walking by.  As I gave away the ball I whispered to Dex, 2500 miles away, "No ball for you".  The mother of the kid yelled at him for lagging behind.  We ran into this kid like 4 more times this night and each time his mother was screaming at him for something or another. 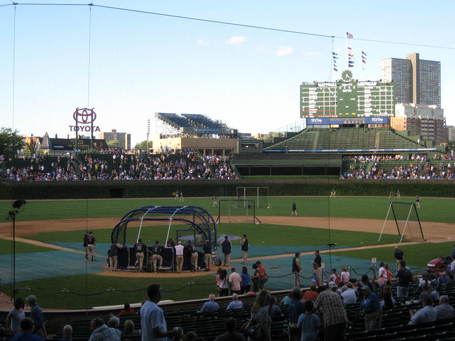 We walked to the upper deck on third base side to find our seats in section 505. It was there that we met Gaslamp Baller Wonko.  We marveled at his rugged good looks and found ourselves speechless when looking into his eyes.

Seating at Wrigley Field is really confusing.  We could see the 505 sign to our left and we were sitting in the proper seat number.  As the game started more confused fans circled our seats like vultures, until an Indians fan told us that we were in 506 and that 505 was on the first base side.  He was half right. 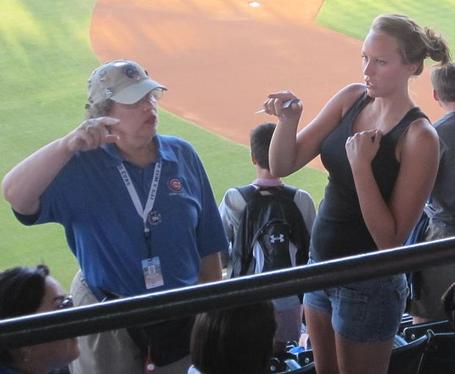 Usher approached us ordering us all to move because we were in the wrong seats.  We were indeed in the unlabeled section 506.  The Usher explained in a guttural yell that all of these seats were in 506 and that the sections were divided at seat 12.  We back sassed "Oh! Well that makes perfect sense. How did we not figure that out?"

We moved down a few seats and decided to find our real seats after we got food.  You know you get delicious deep dish pizza for under 5 bucks at Wrigley?  It's true.

On the way back we had to humbly ask the same Usher Lady to help us find our real seats.  She agreed that the seating was confusing, and helped us find that our seats were occupied. Here we go again.  She quickly kicked a ton of college aged Cubs fans out of our seats for us while I cringed waiting for retribution that would never come.

To be honest, I was preparing for more hostile treatment from Cubs fans towards a Padre fan wearing a 1984 hat, but nobody said anything to me the entire night.  Not even other Padres fans.  I finally had to force a Padres fan wearing a Gwynn jersey to give me a high five after the game. 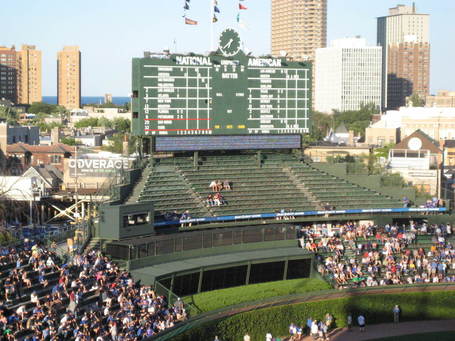 If you follow us on Twitter you probably already know what happened next.  We were sitting behind 4 young boys anywhere between 7-9 years old.  They started playing the "Let's mouth kiss each other" game.  After Fukodome's run scoring double they performed a triple kiss. It was... uncomfortable.

With the Padres firmly in the lead, desperation set in and Cubs fans in the bleachers tried but failed to start the wave.  Realizing then that there was nothing more they could do a good portion of the Monday night crowd left the park.  It was then that we awarded ourselves a seat upgrade, watching the remainder of the game from above the Cubs dugout. 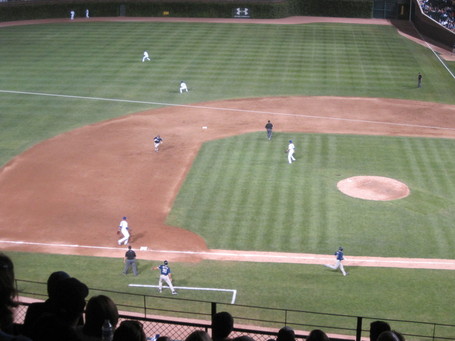 On our way out of the Park we saw the Padres team bus parked near the entrance with just a handful of fans waiting to meet the team.  In no hurry to face the crowds on the "L", we decided to stick around and see who might come out.

It was interesting to see the different ways that players would avoid the autograph seekers.  Some waved them off, some pretended to talk on the phone, some just flat out ignored them.  Others like Luke Gregerson, Scott Hairston, Ryan Ludwick, Tony Gwynn Jr., Mark Grant and Dick Enberg spent a good deal of time signing for everyone.  It was cool.  I'm not someone who collects autographs but I was just standing there, so I had Ludwick sign my batting practice ball.  I felt weird about it though.  When Mentor and Enberg walked to the bus, I didn't want them to see me acting like a groupie so I hid and darted away when the coast was clear... into the Chicago night. 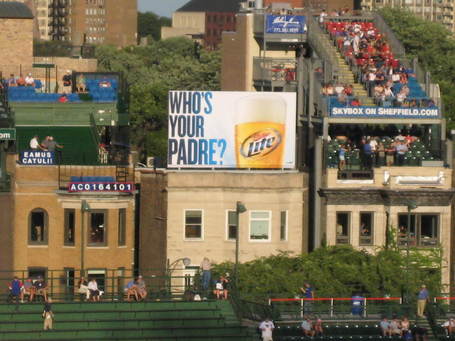