Gaslamp Ball in the Busch

Share All sharing options for: Gaslamp Ball in the Busch

Over the past few days I took a trip to the Midwest and caught two baseball games. On Saturday in St. Louis, Gaslamp Baller thenerdhater and I bought some $5 tickets from a scalper and saw the Cubs beat the Cardinals in the New Busch Stadium. 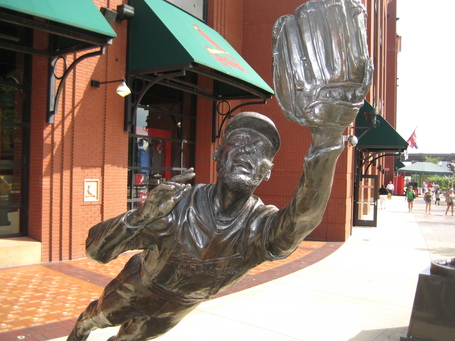 The new stadium looked nice with all of it's red brick and wrought iron, though kinda plain. I'm so used to new ballparks having unique features that I felt Busch lacked. Maybe I was slightly underwhelmed because with the heat and humidity it felt and smelt like an armpit.

I asked if there was any specialty foods that I should try at Busch and was told to try the hot dog. See what I'm talking about? With my Plain Jane hot dog in hand I approached the condiment station. I gasped with amazement when I saw all of their assortment of condiments. They had all types of mustard, ketchup, barbecue sauce, ranch dressing, mayonnaise, relish and who knows what else. I always thought you had to refrigerate ranch, so I didn't dare try it, but apparently Clorox invented a version that does not require refrigeration. 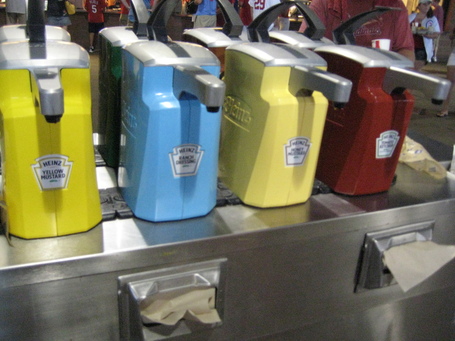 We mostly wandered the stadium stopping here and there to watch the game. I paid $1.25 to throw a few baseballs in front of the radar gun. I asked the lady working the booth who threw the fastest that day, trying to size up my competition. She told me that earlier someone had thrown 94mph. I threw 3 pitches and topped out at 67mph. Something must be wrong with the gun.

A decade ago we went to Old Busch and watched as the temperature dropped 30 degrees in about 15 minutes as a storm blew threw the stadium. This weekend we weren't so lucky and it never cooled off. Fortunately Fireman were spraying a hose for kids and bloggers to cool down. I briefly considered stripping to my underwears and taking a shower but after further consideration just dunked my head. 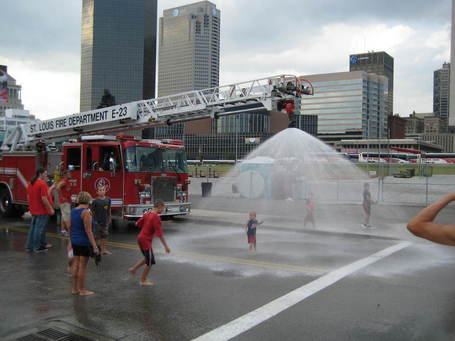 I tried to feign interest in the game, but I have a hard time caring about any team besides the Padres. I wasn't fooling anyone. Here we were watching one of baseball's great rivalries and my mind kept wandering back to those assorted condiments.