I've been lucky enough to attend every Throwback Thursday so far this season.  If my memory serves, this is the first time that they've won.  It was worth the wait. Oscar Salazar's walk off hit was thrilling and put the capacity crowd on their feet.  Just prior to his hit, my friends and I noticed that Aaron Cunningham was on deck and ready to follow Salazar.  We all agreed how much we liked Cunningham.  But I cautioned them not to get too excited,  "It's unfortunate that his only role in this game will be welcoming Hairston to home plate." 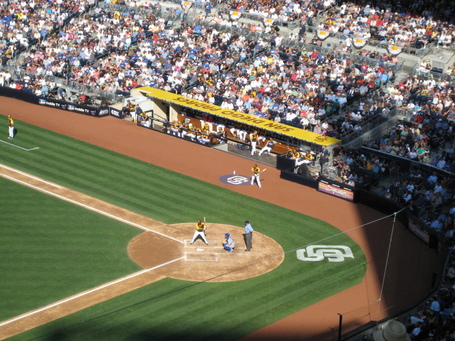 It was the second Throwback Thursday start for Mat Latos and I believe his first start against the Dodgers.  He was effective as long as he kept his pitches down.  I was watching ESPN at a sports bar last night and they were analyzing his pitch location.  Sure enough he owned hitters when he kept the ball at knee level.  When he elevated to waist high is when he gave up the big hits.  I guess you could probably say that about most pitchers though.

I've made a point of attending these Throwback Thursday games because I want to support causes that I believe in.  I believe in Padres Brown and Gold.  I believe in Organ Music.  I believe in baseball under the sun. I believe in letting people retain their hearing rather than being subjected to 120 decibel hat shuffle music.

Do you read Dear Abby?  Of course you do. Silly question.  She recently received some backlash from her readers with regard to wedding reception music being too loud.  I've already been to four weddings this summer and I have more in the queue.  I've noticed the same thing.  There are about 20% of the guests who want to line dance and rock out to YMCA while there are 80% who would love to be able to catch up with family and friends but can't because of the annoying wedding DJ.  "Insanely loud music is part of the contemporary American culture."  It reminded me of Padres games and that's why I think Throwback Thursdays are a step in the right direction.

Random side note:  Dex and I were talking about Jed Hoyer yesterday and we were trying to guess his favorite songs or the songs that most identify him.  Dex was pretty adamant that Hoyer's top three songs are The Star Spangled Banner, Cotton Eye Joe Remix and With Arms Wide Open.  Cracked me up.

Anyway yesterday was one of the best games I've been to all season. It doesn't get much better than beating the Dodgers on a glorious San Diego day, with our boys draped in brown and gold.  Pads are holding a 60-40 record. That's approximately a .600 winning percentage! Somebody check my math.

Gaslamp Baller jbones619 took some video of the walk off hit that pretty much captures the excitement in the ballpark.