I'm being serious when I say the last five games we've attended we've run into Jane Mitchell at the same corner as she exited the park and we entered.  Each and every time she's on the phone and we are grinning ear to ear and waving frantically like idiots.

Sure enough we approached the same corner and I saw someone coming our way. She was talking on the phone with press credentials hanging around her neck.  I prepared my goofy grin and started to wave with two hands before I realized that it was the femme fatale, Chrissy Russo.

I quickly shook my head in an attempt to make my hair look like Justin Bieber, raised an eyebrow to give a suave look and said hello. Only problem was that I forgot to stop waving with two hands. She looked at me like I was a lunatic.  Ahh good times.

We grabbed ourselves a beach towel at the gate and entered.  Petco Park was packed! We decided at the last minute to go to the game and took advantage of Friarhood's discounted group tickets.  We sat in the back, watched quietly and listened carefully to try and pick up on their Friarhood lingo.  Steve came up and talked to us and posed for a picture with Jon and a Friarhood banner.  He and Jon talked about blogging forever.  I can't imagine what Jon had to say since he barely even visits Gaslamp Ball.  Thanks for the discount Steve! 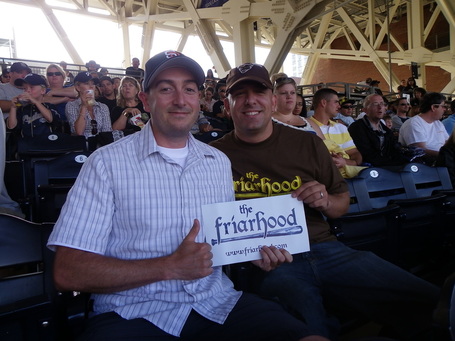 Sometime after the third inning we went to Rubio's to get dinner and Gaslamp Baller matthewverygood came up behind me and slapped me on the back of the head and then hugged me tightly around the middle.  "Um, good to see you too?"  He refused to introduce us to his girlfriend though, which we all agreed was rather rude..

Next we met up with Gaslamp Baller Axion behind section 102 as we ate our burritos.  He mentioned that he was hoping to find an unaccompanied beach towel that he could give to jodes0405.  I gave him a look that said "You can't have ours!" The temperature was dropping and I needed to wear mine like a shawl to keep me warm.

After the Padres won, we exited the ballpark and I found myself standing in the crowd next to the In-Game Entertainment Host Jeff Krapf.  I knew I had to seize this opportunity.  I had to say something to him, but what?  I leaned in real close to him and muttered underneath my breath "Can I get a wooo?" He turned toward me with that big TV grin and gave me a big "WOOOOO!"