I really liked that book Cardboard Gods and I sent some interview questions over to Josh and he answered them and now I will share with you what has transpired:

Gaslamp Ball: Cardboard Gods is a deeply personal memoir and, frankly, paints your family in not necessarily the best light. How did your family react to the book?

Josh Wilker: I’d respectfully suggest that it might be a matter of debate, depending on one's point of view, over whether the family is shown in a good or bad light in the book. To me, the members of my family are the heroes of the book, if not heroes in the service of a wider, more inclusive idea of what it means to be a part of a loving family in America. That said, I think the book does get into some painful territory at times, but I have been writing about my past for quite a while, so my family is somewhat used to being characters in my stories, and that may have helped prepare them for reading the book. Also, they understand that it’s only my point of view, and not "the truth."

GLB: How big is your card collection? Have you ever gotten around to storing or protecting them beyond rubber bands?

JW: It’s not that big of a collection—just what I gathered during my childhood, which included six years of heavy collecting. Even in the heavy years, I never completed a set, but probably got about two-thirds of the way there. I’ve never counted my cards, but I can tell you that they all just barely fit in a very large shoebox for some hiking boots I bought for my Frankenstein feet (size 13). As for the storage of them, I keep them the same way I did as a kid, which is in a box and wrapped into teams by decaying rubber bands. I like it this way, because I can touch them, which seems to be an important part of connecting with them and letting them lead me somewhere. They pretty much got the value beaten out of them when I was a kid anyway, so putting them under plastic at this point would be pretty pointless.

GLB: From what I've read beyond Cardboard Gods, you've earned an MFA. How does somebody go from "special ed" to "private school drop-out" to MFA?

JW: Ha! Well, it’s a good question, and because I think it’s sort of pertinent to the answer I have to point out for people who maybe haven’t read the book that I didn’t exactly go to "special ed" but to a hippie-influenced free school elementary class for several years. There are definitely some laughable gaps in my basic education because of the class’s philosophy of letting the kids determine their own educational path. But I was very much encouraged to be creative in that class. That kind of encouragement dried up when I got to "regular" junior high and high school, so by the time I went to prep school I was totally uninterested in school and got into smoking pot and drinking and, soon enough, was booted out of the school. I never lost the interest in storytelling, though, and after drifting around for a few months outside of any kind of schooling I went to a small state college in Vermont and got a BFA in creative writing. Some years after that, all years in which my primary focus was on becoming a writer, I went back for some more schooling and got the MFA in fiction writing. Basically, I’ve always done pretty well in educational environments that emphasize creative freedom and growth, and not so well in the kind of schooling that features desks (and patterns of thought) in straight rows.

GLB: Will Cardboard Gods, the blog, ever run out of material? What happens when you run out of baseball cards?

JW: Though I don’t have a gargantuan collection of cards, I can say that even after nearly four years of writing about my cards on my blog, I have only just begun to scratch the surface of my collection. Even if I live for a long time, I should have cardboard to pray to on a daily or semi-daily basis. As for whether I will run out of material or not—even a week or so into the whole experiment I was convinced that I had said all I had to say about baseball cards, so really it’s more of a challenge like the challenge of life itself: finding some way to get interested in and curious about the world. It’s kind of like my religion, or the closest I’ll get to one.

JW: Well, the Padres offered up a lot of beautiful images in the 1970s, such as the sight of Rollie Fingers in Padre brown and yellow in a 1978 card, or Vicente Romo in his 1975 card looking like he’s putting a hex on the opposition, but in the end it's really hard to beat this guy . . . 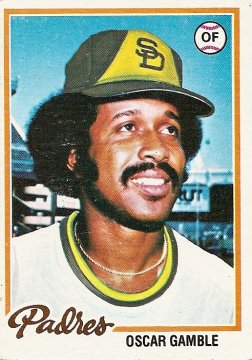 GLB: What's the plan for this weekend? A bubblegum contest I hear? (stay tuned for more info on Josh's upcoming San Diego visit)

JW: If we can get a few people to come to the reading and participate, I’d love to honor former Padre and eternal god of bubble-blowing Kurt Bevacqua by holding the West Coast Kurt Bevacqua Bazooka Bubble-Gum Bubble Blowing Championships at the end of my reading. I’ll probably read a little from my book, and then get to the chomping and blowing.

GLB: Any plans for another memoir? Another book?

JW: I’m working on a short book for a series of highly subjective, passionate, irreverent books about film. My entry in the series is about The Bad News Bears in Breaking Training. After that, I’m sure I’ll keep trying to wrestle words down onto a page one way or another.

Thanks to Josh Wilker! Be sure to check out his memoir Cardboard Gods: An All-American Tale Told Through Baseball Cards

. Josh will be at The Upstart Crow in Seaport Village this weekend for a reading, signing and bubble gum blowing contest. Details to follow!