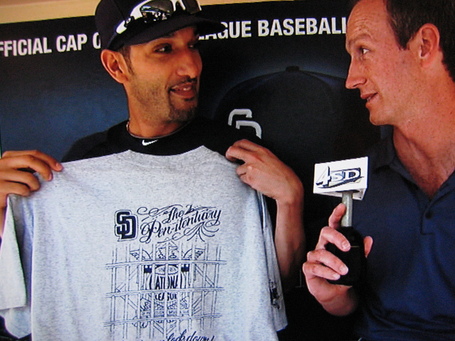 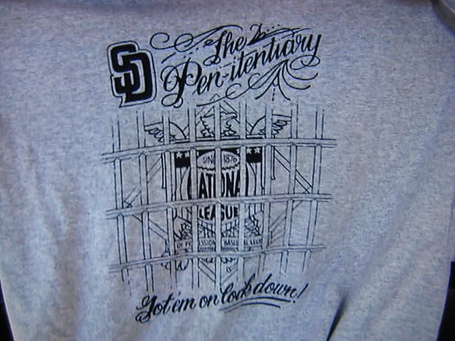 Tom Krasovic over at FanHouse wrote on Friday that Mike Adams and Heath Bell came up with a nickname for the Padres Bullpen, "The Pen-itentiary".

Jed Hoyer thought so too.

"Things like those shirts are great," he said. "I feel great bullpens are a unit, and I think things like that are part of the camaraderie."

John Weisbarth of Channel 4, pictured above, interviewed Mike Adams before Saturday's game talking about the bullpen being the team within the team.

Adams explained how the shirt shows the National League logo behind bars because the Padres bullpen locks down the rest of the leagues hitters.  At the bottom of the shirt is their motto, "Got 'em in lock down!"  Now I'm not one with a dirty mind but the "L" in "lock" sure looks a lot like a "C", but either way I think it's a great shirt and great motto.

Only the bullpen is allowed to have the shirts but Weisbarth begged for the display shirt and Adams allowed him to have it as an honorary member of the bullpen.

The Padres Store need to start selling these pronto, I'll bet you they could sell half a dozen of them in the first week alone.

Jenny Cavnar says that Mike Adams and his tattoo artist designed the "BELIEVE" shirt and the "Pen-tentiary" shirt. She doubts it will be their last.