Memoirs are always bittersweet, which is what I love about them. I love things that are funny, but just a little bit sad, or maybe even a lot sad, but then funny too. I especially like when they fall closer in line to the self-descriptive namesake of "bittersweet" and are bitter, but with that tinge of sweetness. Like a sourpatch kid. It's more like real life that way. It's why, even in the memoir of the most successful people in the world, you'll find them mention a particularly moving death in the family, or the loss of a prized snow sled or something. Everyone is connected by bittersweet.

is Josh Wilker's memoir slash baseball card retrospective. The book leans a little more towards the sad/bitter as opposed to the funny/sweet. Not a lot, but just enough where about halfway through, I couldn't help thinking that I didn't want to keep reading it because Josh Wilker had some kinda unorthodox childhood, which I found a little disturbing.

The whole memoir is written as a series of essays, with a particular baseball card as the central theme. Reggie Jackson is in there as a symbol of that moment in the 1970's when facial hair stopped being a symbol of rebelliousness and became a directionless decision to be made. Rickey Henderson's rookie card mirrors a story about trying hard even when what's immediately around isn't exactly championship caliber. Randy Jones' half of an NL Wins leader card (shared with AL leader Jim Palmer) is coupled with the story of not being exactly the best looking, tannest guy with the most attractive hair, essentially the most obvious talent, but nevertheless being great. 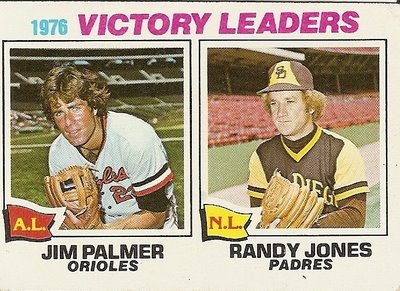 Back to the semi-disturbing stuff. The more memoiresque part of the book deals mostly with Wilker's childhood. His mother and father end up in a sort of experimental marriage with a man named Tom who shares his mother's bedroom while his father lives in the guest room. This all happens at a young enough age for Wilker that he thinks that Mom and Tom and Dad is just as normal as Mom and Dad.

Meanwhile, he idolizes his older, not so bright, but athletic brother to the point that he doesn't realize that his brother (at one point nicknamed "Head Case" by his basketball team) might not be as perfect as he would hope and is actually a follower and bullshitter himself, which is a terrible combination for somebody who wants to fit in. Wilker's also plagued by night terrors as a kid and is enrolled in an experimental learning class during elementary school, which prompts the rest of the students in the regular classes around him assume that he's a "faggot" and "retard".

But, Josh finds comfort in his baseball cards and in baseball in general, which is a good thing, because a slightly different story might've found this guy plotting to overthrow America or something.

All told, the essays blend between memoir and reflection on baseball cards and makes for a good read (if not just occasionally a tad on the longish / writing exercisey side). It's very well done and I am prompted to read more of his blogging work at CardboardGods.net. Strong recommendation.