Share All sharing options for: Next stop Breakfasttown, USA!

It wasn't so long ago that we were informed that San Diego was a Breakfast Town.  It took some time for a couple San Diego natives to digest the news, but since then I feel like we've come to embrace the weirdness of our city's moniker. On Sunday morning Dex, his family and I went to see what Breakfasttown, USA was really all about.

There were a few breakfast carts in the Park at the Park and we stood in line with squinted eyes acting very skeptical of the whole event.  At the front of the line I filled out a scrap of paper to make a custom Breakfast Bistro Baguette. I went with the Eggs, Cheddar Cheese, Onions, Philly Style Steak and some other stuff for $6.  To drink a cup of Orange Juice for $2.50.  Dex says that the Blue Berry Muffin was $7 which seems out of whack with the reasonably priced egg items. 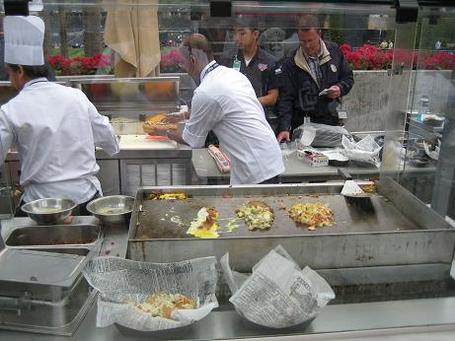 As we waited for our food we ran into an off duty Pad Squad Loxie and a very on duty Pad Squad Andre.  Andre informed us that it was Loxie's birthday. She turned 25 which means that she can now rent a car and I think her car insurance is lowered too.

Dex continued to wait for our food.  I guess they ran out of bread, maybe they weren't ready  for the sell out Sunday crowd.  The rest of us headed down to our table on the field. The Padres set up tables around the warning track of the outfield.  Heath Bell was down there playing catch with his son, Jeff Moorad was having a cup of coffee, Mentor was mentoring, Mat Latos was running laps around the grass.  I considered trying to give Latos a high five as he ran by or to wave at Moorad but thought I might be yelled at if I did.  I had to be on my best behavior.

One of us was not as well behaved. Dex's son Elliott who is two years old saw the vast green expanse in front of him and decided to take a little stroll, which sent Park Security onto red alert.  They came running at him yelling warnings.  Dex was like "Don't tase him! He's just a kid! Put away your tasers!"

Pad Squadders Bree and Kristen stopped by our table to ogle Elliott.  I swear he gets all the attention from the ladies.  He was given some stickers and tattoos, which he would soon wear with a half a cup of orange juice.

Our food was ready and it looked delicious.  I tried to stuff half a baguette into my mouth and Mentor looks over and gave one of those looks like "I told you so.  This is a Breakfast Town."  I looked away quickly.