Share All sharing options for: Padres sweep Giants for second time. Latos throws one hitter, drives in games only run

The only hit that Mat Latos gave up today was one that he deflected off his glove. Latos was nasty today... like Human Centipede nasty.  If you don't know what Human Centipede is then be thankful. I'm warning you right now, don't look it up. Padres will have to wait for their first no hitter. 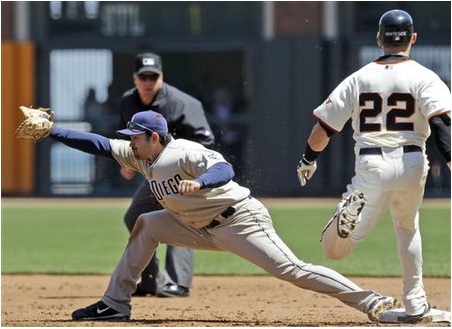 I admit even though Latos was dealing I was a little bit nervous that Black was going to leave him hanging out there in the breeze too long  like Torrealba's back pocket.  Hats off to Latos for the complete game and giving our overworked bullpen a day off.

Now I'm not one that believes in jinxes but is it me or did everybody and their mother mention Latos' perfect game? In the Game Thread on Twitter.  Loose lips sink ships! Just now it's sinking in how close Latos was to a perfect game. Le sigh.

Padres are on a roll!