Opening Day: Away at the Park...in the Rain

Share All sharing options for: Opening Day: Away at the Park...in the Rain

Forced out of Petco Park at the conclusion of the Tour we stood in the pouring rain for a moment before running to the Padres Store.  There were some cool hats but $42 was a bit much.

So we decided to see if anybody was at the "Away at the Park" festivities yet.  I had noted earlier on twitter that Chrissy Russo was going to be at the Park shooting a segment at 1pm.  It was 1:30 now but maybe I could finally meet her, there might still be time. 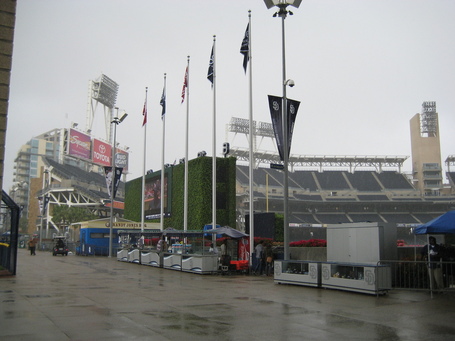 The rain was really coming down now.  As I stood under the eave of the condos, I imagined a scenario where she would be filming under a rain tarp and she would see me standing soaking wet like the poor man's John Cusak in the rain.  She would drop her microphone, call my name and we would run to each other, spinning in circles until we fell hopelessly in love or into a mud puddle.

In reality the crew was packing up the equipment. She was gone.

There was no time for heartache, instead we kept running to the Right Centerfield side of the park where the festivities were moved.  Soaking wet as we entered underneath right field, our eyes locked with Pad Squad Andre.  He called our names and ran to us, with open arms -- this was not what I had in mind -- he offered us a free ice cream coupon.

We shivered as rain ran down our faces and looked at him in disbelief as we held the ice cream coupon, just what we needed.  We shrugged, never ones to turn down free food.  We ate Dibs ice cream and continued to shiver as we watched Padres employees frantically, yet methodically set up about 5 Plasma TV's for the 30 of us that came to watch the game. 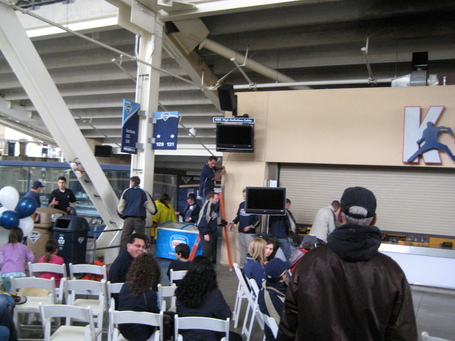 About a half hour later Gaslamp Ballers matthewverygood and jodes0405 showed up.  By this time I was wearing interlocking SD magnets as earrings and eating my second helping of Dibs.  The late stages of hypothermia were upon me.

It was jodes0405's 21st birthday so she accepted her first Padres beer from matthewverygood, but refused the can of tobacco that we found in the dugout.  Instead we told her that she could pick anybody she wanted to be banned from Gaslamp Ball. 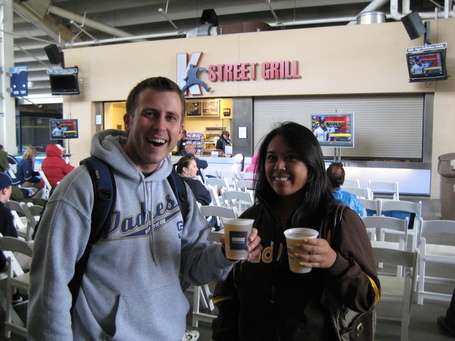 As the sun came out we ventured out to the Park at the Park to attempt to dry out and warm up.  I've got to hand it to the grounds crew, the Park at the Park drainage is great.  The grass was barely wet we were able comfortably sit and watch the remainder of the game.  Gaslamp Ballers eastbaySD and TheAxeManCometh showed up later and graced us with their presence. 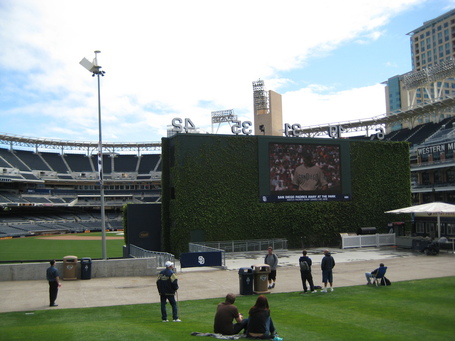 Thanks to all the Padres employees for setting up the festivities.