I was talking to Dex a few months ago about how I wanted to take a Petco Park tour just to see what it was all about. If a Padres fan had already seen the bowels of Petco Park during FriarFest would there be any value added by taking the tour? This would require some research.

We looked up the Petco Park Tour page and saw a picture of one of the tour groups being used for marketing. Have you ever seen a group of people looking more bored? Could a tour be this boring? There was one way to find out. 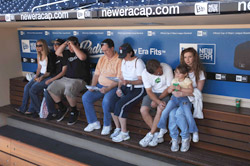 I took Opening Day off from work and decided to warm up for the game by taking the 12:30 tour. It was timed perfectly so that the tour would get out right before the game started and we could attend "Away at the Park" to watch the game on the ballpark's big screen.

Although prepared to take the tour by myself, your friend and mine, Jonny Dub, was gracious enough to be my companion. 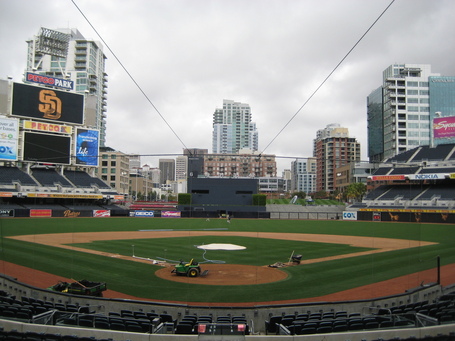 It was a cold, blustery day in our fair city. Upon arriving we were given some baseball cards and a quick description of what the East Village was like before Petco Park was built. It sounded like hell on Earth: bordellos, gangs and criminal mischief.

Our first stop on the tour was the Toyota Terrace. We looked out at San Diego Bay and were told that it would have been nice to have the Ballpark closer to the bay like in San Francisco but a batter must have his back to the East when at the plate per the MLB's rules.

Did you know that in 2010 all ticket holders can visit the Toyota Terrace level restaurants? Well, all but one. I hope you don't like Japanese Food (Adrian Gonzalez wants you to know that in Japan they just call it food). The Japanese restaurant is still off limits to those without proper authorization.

From the Toyota Terrace we entered the Press Box. We were told the media gets all the free hot dogs, sodas and ice creams they can eat. It's a pretty sweet and high calorie gig if you can get it.

We were all asked to take a seat in booth. I scrambled to sit in Jenny Cavnar's chair while Jon wanted to sit in Corey Brock's. There are three levels to the press box. The level closest to the field is for local press. The second level is for the opposition's press and the third level is for the foreign press. 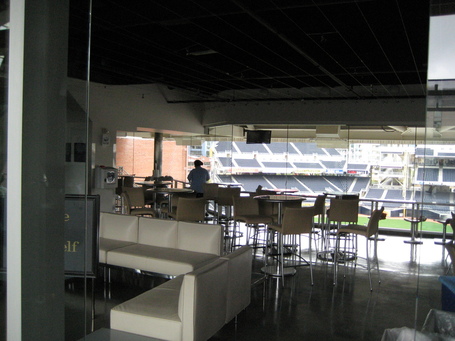 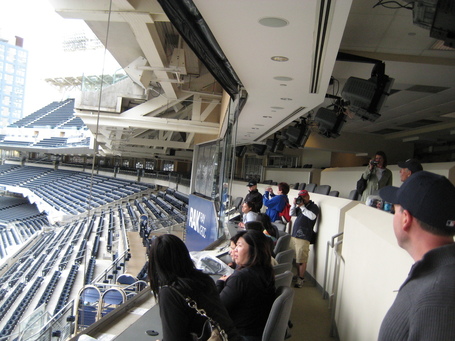 Our Tour Guide told us that back in the olden days, fans in center field used to wear black sweaters when the home team was at bat and then they would remove them to reveal white t-shirts when the opposition was at bat. Oh the fun they must have had, until MLB made each team employ a batter's eye.

Here's an interesting fact: the team manager gets to decide how long the grass is on the field. Bud Black likes to keep it at 7/8th's of an inch. Coincidentally I like to keep it trimmed to 7/8th's too... if you catch my drift.

On the Toyota Terrace once again, our Tour Guide told us that he was in the middle of a tour yesterday when the Earthquake struck. At first he thought he was sick and might need to sit down, but he saw the foul pole swaying. He showed us the Earthquake seams that run through Petco and allow the Park to move with the quake in a forbidden dance, like the Lambada.

We walked into one of the suites that can cost up to $250K a year. Brian Giles was the only player to have a suite written into his contract, #24 was his private suite. I looked around and muttered to myself "Oh if these walls could talk."

Next we entered the Western Metal Supply Building. It used to be the tallest building in San Diego when it was built in 1909. The Padres received a nice tax break by attaching the ballpark to a historical building. Inside we were introduced to the members of the Padres Hall of Fame and told of their accomplishments.

The next stop was field level where we were shown Jerome's Furniture's best seat in the house where they set up leather e-z chairs. Our Tour Guide told us, "As long as I'm showing you the best seat in the house, I might as well show you the worst." There are four seats that are never sold because they have no view of home plate. They do get used occasionally for concerts that are in center field, for instance the Madonna concert. If those seats gave you a clear view of Madonna, they still sound like pretty bad seats. 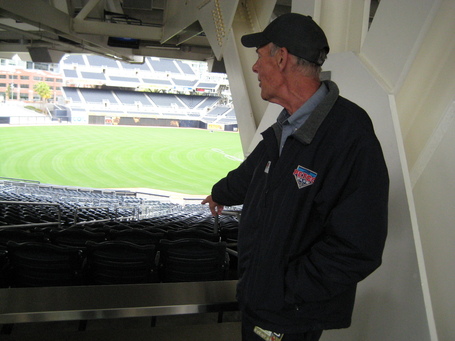 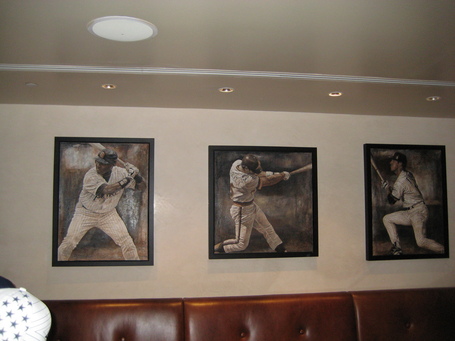 Inside the Clubhouse Restaurant there are paintings of the all time Padres as voted on by the fans. Our guide told us a story of Gaylord Perry that may or may not be true. I'm guessing the story is a hoax just like the one about of Nate Colbert hitting a home run right as man stepped foot on the moon and the moon landing itself.

Outside again, we all sat in the dugout. We saw the MLB Network camera that was installed last year. There was a sign saying not to cover it with it's protective hood because the MLB wanted to keep a watchful eye on the Padres. It reminded me of those seeing stones, the palantíri, from the Lord of the Rings that the evil Sauron used to keep watch over Middle Earth.

Jon found an empty can of Copenhagen chewing tobacco in the dugout from yesterday's practice and I carried it around the rest of the day so I could look as cool as a bonafide major leaguer.

We were told that when the ballpark was built fans were asked the one thing they needed above all others. They demanded cup holders for every seat. Park employees find that fans tend to leave cell phones in the cup holders, an average of 8 a game.

Let's see, what else? The seats behind home plate are an inch and a half wider than other seats because they are built for fat cats.

You know what was nice about this tour? You were allowed to enter into the visitor's clubhouse. It's much smaller than the home clubhouse. In the visitor clubhouse bathroom Jon pretended to take a big league shower as I snapped pictures, urging him to take his clothes off, "we're not going to do anything that you're not comfortable with."

Interesting that there was a handicapped shower and a kid's urinal in the bathroom, which you would think Major Leaguers wouldn't need, but it probably has to be built to code.

After the tour we were thrust outside the ballpark into pouring rain. "...and stay out!"

In conclusion, the ballpark tour was not as boring as I had hoped. It was actually quite interesting and much better than I expected. If you are a Padres fan and haven't been to FriarFest it's worth taking a look around. Special thanks to Tour Guide Ron for being a gracious host.