Postcards from the Edge: Dave Winfield

Share All sharing options for: Postcards from the Edge: Dave Winfield

After getting the first two postcards signed and mailed off, Dex and I were pretty sure that we weren't going to be able to get anybody else to sign the third and final card.  All hope seemed to be lost by the time we arrived at Saturday's day game at Camelback Ranch and taken our seats.

Then suddenly, seemingly out of nowhere Hall of Famer Dave Winfield sits a few rows behind us.  I pulled the last postcard from my pocket and locked eyes with Dex.  We communicated it all through that look... "Dude I'm nervous.  Should we even attempt to ask him to sign this last card?  I'm scared.  He's so much bigger in real life. Ok.  Eff it.  I'm asking him, but if something happens to me...  tell my story."

I handed him a postcard with a picture of an outhouse on the front of it and tried to explain as briefly as I could what we were trying to do, but my mouth was so dry and I was stumbling over my words.  Some how he deciphered my stuttering and said something like "So you want me to write a postcard to this guy? No problem."  Just like that it was done.  Gaslamp Baller CurbEnthusiasm was getting a postcard from a Padres Hall of Famer! 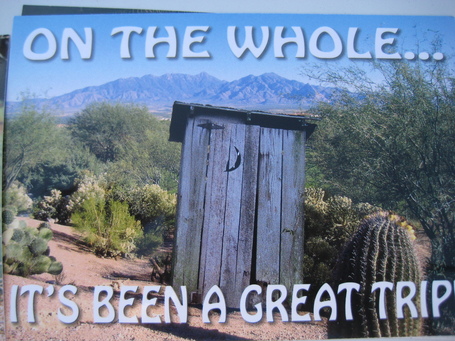 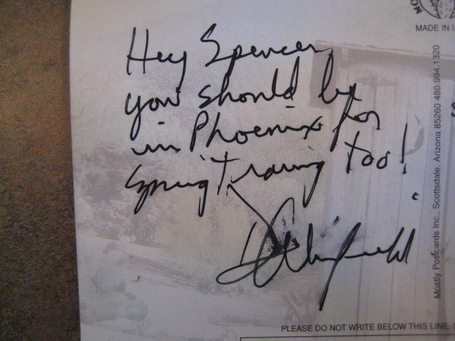 After that we made small talk asking him about his "Friar Fit" program at the ballpark.  He looked at us suspiciously "What do you know about Friar Fit?"  We told him we knew about the program to get kids to exercise more and eat nutritious foods.  We knew about the program in large part because of Pad Squad Andre, who wrote about it back in 2008. 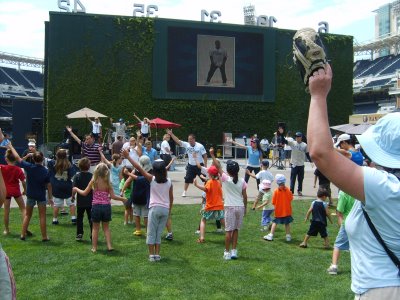 Winfield is very passionate about combating childhood obesity and it shows.  He told us that he's been trying to grow the program for years and he's wants to get the entire MLB involved.  In the time since he's pitched the idea the NFL and NBA have put similar programs in place, but the MLB seems to move at their own pace.

Acting out his frustration he raised his hand and swung it within a few inches of my head.  I've never been a victim of a bear attack but I now know what it might feel like to have a grizzly bear try to knock your head off with a swipe of their paw.  Not going to lie, it was intimidating.

Somehow we started talking about fundraisers and he was trying to tell us some of the celebrities that were invited to a particular event.  He tried to find them by looking them up on his phone and asked us to look since we could probably do it faster.  Dex admitted to him that he doesn't have a data plan for his blackberry.   Winfield gave us one of those looks like "It's 2010 dudes, get with the times"  He handed his phone to Dex for him to research it for him.

Before we left to get some fattening ballpark foods and increase childhood obesity ourselves, Winfield handed me his business card.  It was a simple card. On the back was his website: davewinfieldhof.com. On the front a picture of his Hall of Fame plaque.  How cool is that?  It's like "Here's my credentials".

I was thinking to myself, "Should I ask him to sign this business card?  It would be pretty cool, but I don't want to bug him any further."  Without saying a word he took the card back and the pen out of my hand and signed it and gave it back to me.  Dave Winfield can read minds!