Postcards from the Edge: Tom Garfinkel

Share All sharing options for: Postcards from the Edge: Tom Garfinkel

If you're just joining us, we are on a mission to get three postcards signed by the Padres for you our dear readers.  One down, two to go!

Once inside the Peoria Ballpark, Dex and I left our seats to get some refreshments. As we came out of the tunnel there standing before us was Padres President/COO and our mentor Tom Garfinkel.

Do you watch that show Undercover Boss?  It's a show that follows a company president as he disguises himself and works in one of his business locations at a low level job.  It's a ruse to find out how his business is really running - from the inside!

That was my first thought when we saw Mentor, he was dressed casually and growing Van Dyke facial hair.  It was an obvious attempt to disguise himself, but fortunately we have observational skills like Encyclopedia Brown and recognized him without too much trouble.

We pulled the postcards from our pockets and asked him if he wanted to write to a Gaslamp Baller.  He looked at the two remaining postcards and chose the one featuring the gunfighters because he thought that the gunfighter on the left looked like Padres Pitcher Mike Adams.

After our run in with Buddy Black I assumed that all baseball people need someone's back to write on, so I proudly presented my backside to him. He gave us a weird look and was like "Uh I don't want to poke you" and turned to write on a nearby wall.

I hung my head in shame as he wrote his message to Gaslamp Baller Art Vanndelay. 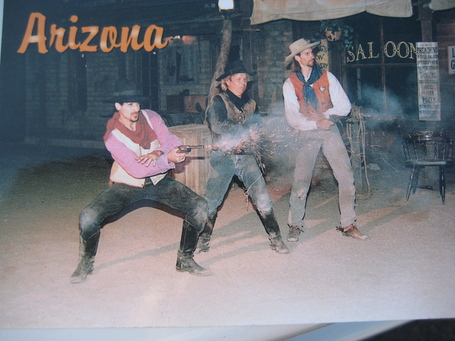 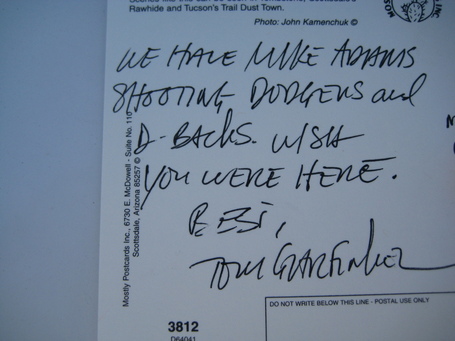 With the postcard in hand we headed back to our seats, only now do I realize that we never got our refreshments.  The things we do for you, the sacrifices we make.