Postcards from the Edge: Buddy Black

Share All sharing options for: Postcards from the Edge: Buddy Black

While writing about our proposed trip to Spring Training, I mentioned last week that we'd send you a postcard if you emailed us your mailing address.  Somebody asked if I was serious.  I didn't really know if I was serious because I really didn't expect anybody to take us up on the offer, but sure I guess so.

While Dex was in line for his Date Shake in Dateland I bought three postcards for those brave souls that were willing to give me their mailing address.  You're brave because I'm probably going to send you all magazine subscriptions that you'll have to opt out of or end up paying for and if I'm ever in your neighborhood I may stop in to use your bathroom.

As we drove into Phoenix we decided that instead of just scribbling something weird on the back of the postcards that we'd try to get Padres to write the postcards for us.  With any luck we'd run into some Padres and be able to convince them to write a postcard to someone they didn't know.  We thought it'd be a cool surprise for the three Gaslamp Ballers.

Well wouldn't you know it, within the first half hour of Spring Training we were fortunate enough to run into Padres Manager Buddy Black.  We told him our plan and showed him our three postcards with your names printed on them.  He shuffled threw them, studying them carefully like each one had a legitimate chance to make his rotation.  He decided on the postcard with the bunny on the front that was going to Jodes0405.

We told him that he had made a good choice because not only was she a huge Padres fan but she was also a die hard Aztec fan.  As a proud Aztec himself he seemed to like that and he spun me around and wrote the card on my back.  I questioned him, "Is this how you write the line up too?  On someone's back?"  Black said "Yep, this is exactly how it's done."  Wow-wee! 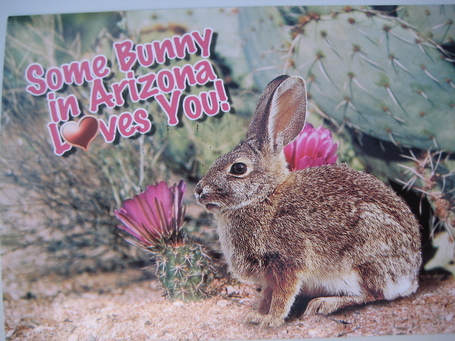 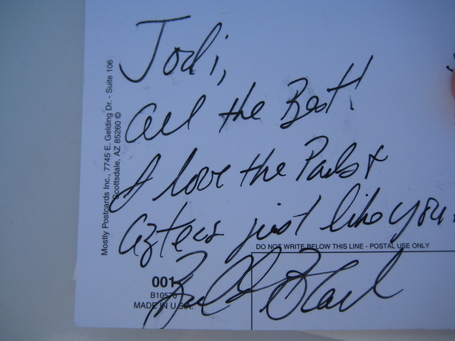 Notice that Buddy Black signed right over the warning "DO NOT WRITE BELOW THIS LINE - POSTAL USE ONLY".  Black doesn't play by your rules. He's a rebel.