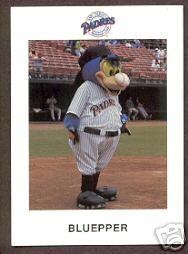 Back in 1992 the Padres replaced the San Diego Chicken with the ill conceived Bluepper ("That's Padres' blue , plus blooper.") the blue dog with a baseball for a nose. I barely remember him.

This is the only photographic evidence of his existence.

The LA Times has a story from back in '92 talking about the tough transition period that Bluepper faced.

Bluepper Isn't the Chicken, and He May Be Around Awhile

Kids would beat on Bluepper at every game so the Padres assigned a sweet young teenage girl to protect the mascot. That only attracted teenage boys. They'd follow Bluepper and the girl around the ballpark. So they had to bring some older dude in to act as a deterrent.

"It's taken almost a whole year where the crowd finally warmed up to me, and they know who I am."

Ownership at the time was happy with Bluepper: A spokesman said there was a "99% chance" that he would return next season.

Did he return the next season? I don't remember and really it's not important.