Share All sharing options for: Gaslamp Ball was on TV! (2 minutes down, 13 minutes to go)

Nobody really voluntarily came up with deciding to congratulate us for our 5th anniversary. We had to go around and email people and beg for quotes.

Flash back to 4 years ago. One of the first interviews we ever did was with Chrissy Russo. She made for a terrific interview and we've kept in touch on and off since then.

Bring them both together. Chrissy was one of the people we reached out to and she promised us for months to write something for the post. JBox was emailing her 3-5 times a week. She kept bouncing back saying that she wanted to write something, but... like... wouldn't.

In the end, it turns out she wanted to have us on the television and invited us on Fox5 in the morning.

JBox couldn't make it for some reason or another so I brought Jonny "the blog will never last" Dub. Jon called me that morning. "Dex, I'm so scared. I'm so so nervous." I said, "Maybe you should take a nervous poop." Jon said, "I did already. Twice."

Jon and I drove up to the Fox studios. We didn't eat anything and we were so giddy. Jon especially so because of the, all but guaranteed, U.S. win in the Americas Cup. 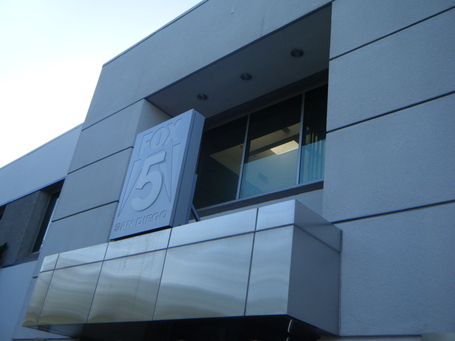 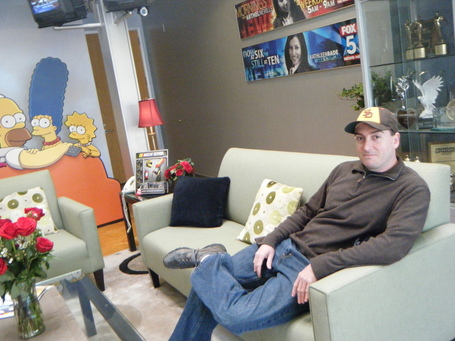 Warren Miller, Padres Director of Media Relations, greeted us. He was wearing this really beat up hoodie and a dirty looking Titleist cap. He was friendly as always though as smiled at us and said, "HEY there, boys. How we doin' today?"

Jon leaned in close and whispered, "Dex, who's this homeless guy?"

Heath Bell was with him along with Heath's kids. One thing I'll say about Heath Bell is that he's really not as big as he looks on the TV. I didn't recognize him at first with no hat on and wearing his shades because he looked so slim.

Here's a picture of him with his son. Jonny Dub is in the foreground. 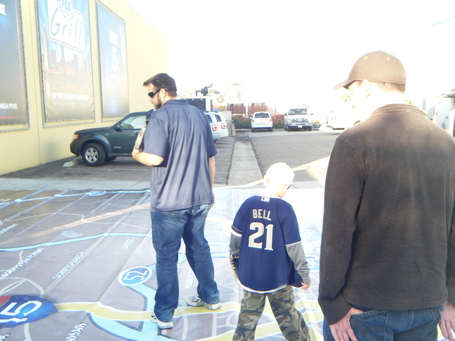 You know that giant map that Chrissy walks on when she does traffic? We walked on that thing too.

WHERE ARE THE CHRISSY PHOTOS. WHAT IS TAKING SO LONG.

What you want is after the jump.

Here are some photos of Chrissy: 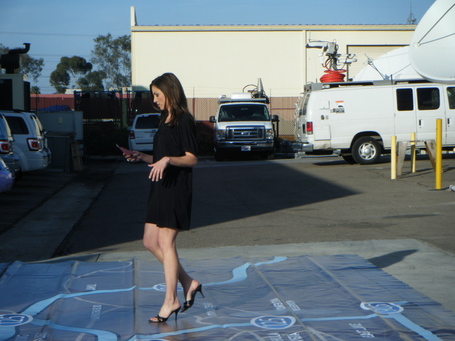 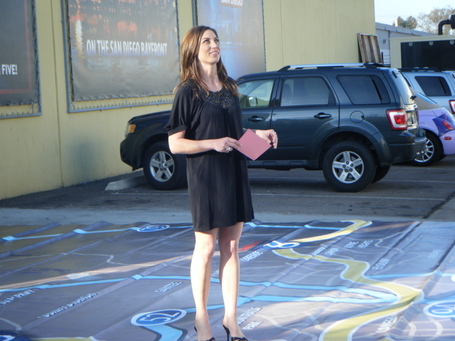 Chrissy was a bit shorter than I expected her to be. Before meeting her in person, I had her pegged at 5'6" to 5'8" and thought that in heels she'd be taller than me, but it wasn't the case. Also, this sounds weird, but her legs are beat up. I know what you're thinking. You're looking at these photos and you're saying, "Dex is f_cking blind," but it's true. Chrissy does this Israeli martial arts as a workout and she had black and blue marks all over her thighs.

We had a while before our segment, so we just kinda hung out with Heath, his kids and Laura Broderick, the Senior VP of Brand Development for the Padres. She was very much intent on handing out these nice looking pins with the "new" SD branding. I made a point to tell her that I was not a fan of the home plate shampoo bottle logo.

"Oh we're really going to be doing more with the SD going forward," she said. "On the jerseys and stuff like that."

"That's good," I said. "Because every time I see the home plate logo, I get the urge to toss my hair luxuriously."

Bullet points of our conversations:

Actually, that last point is funny just because when Heath mentioned that he didn't read the blog, Jon and I both responded at the same time, "You don't want to." This is the kind of sales job we do.

Here's a picture of us sitting around. 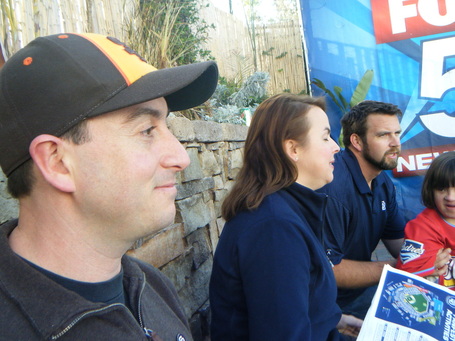 We told Heath about the Zero to Tony Gwynn scale and he was surprised that he rated at all. He said he would've given himself a 3.

"You're a Padre though," I said, despite silently agreeing with him. "Nobody even remembers you as a Met."

"Nobody except for Met fans," he said. "You'd be surprised how many New York fans I get telling me that it all went downhill after I left the club."

We also told Heath about Steve Garvey's ranking on the scale, to which he replied, "That guy's a Dodger." When we later got a photo of Heath with the Numbers shirt, he said, "You oughta figure out a way to photoshop the 6 out." 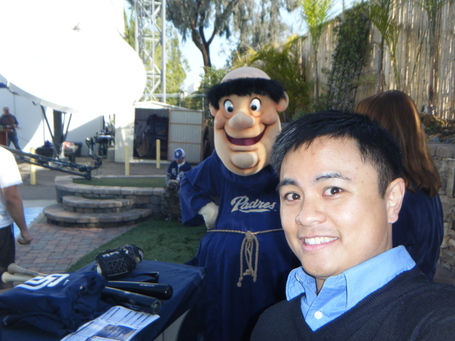 You'll notice the bad skin and blemishes on yours truly. While we were sitting around I thought aloud, "I should've asked for makeup. Are we gonna get makeup?" Heath Bell, wise as he is, replied, "I wore makeup once for TV. You know what it's like? It's like somebody put stuff all over your face."

Here we are, representing the Padres well with a giant number 5 looming behind us: 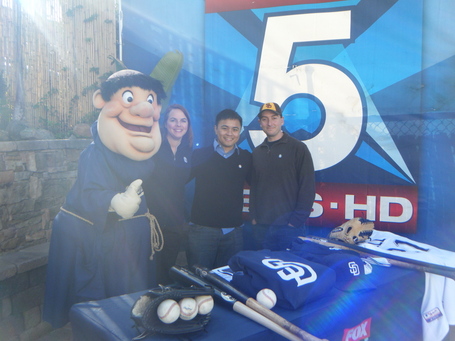 Heath and I doing party face: 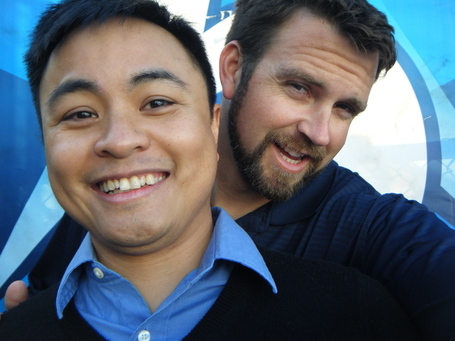 Heath getting frisky with Jon: 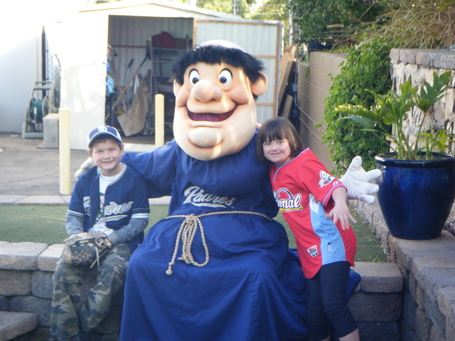 Heath's daughter, Jordan had a little crush on Jon. She mugged for the camera a bit when I was taking video and then got really shy when we got together for a group shot. She wouldn't let Jon join the photo. Kept holding his hand. Jon had to convince her that he was gonna come right back. Between that and the Heath kiss, Jon has got the Bell family wrapped around his pinky. 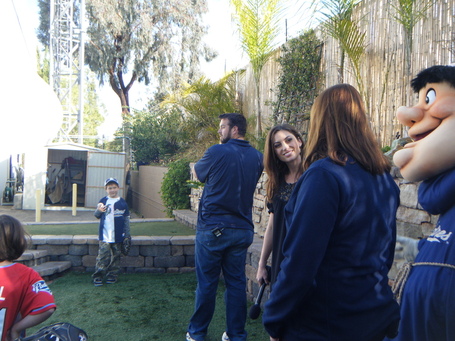 See how Chrissy's peeking over Laura's shoulder? I swear Chrissy knew I was taking a picture right then. Nobody tilts their head that way unless for a photograph.

And finally, we had a t-shirt with us, but didn't get Chrissy to put it on. She was taping a segment right after that and the shirt was too small for Heath, but we got them to hold it up for us.

Good times! Thanks so much to Chrissy and Fox 5 for having us on! Thanks to Laura Broderick and Warren Miller for the nice gifts from the Padres! Thanks to Heath Bell and family for being so cool to us! We'll see you all again in 2015!