Share All sharing options for: I'll tell you my two favorite activities at Friar Fan Fest

I was sooo excited about catching pop flies in the outfield.  I woke up at 5:40am this morning going over each catch in my head and unable to go back to sleep.

Once on the field we waited in line for about an hour in the blazing hot sun.  All I could think about were those easy cans of corn falling into my glove.  I kept telling Dex and Jon how I was going to show boat and make them look like fools. 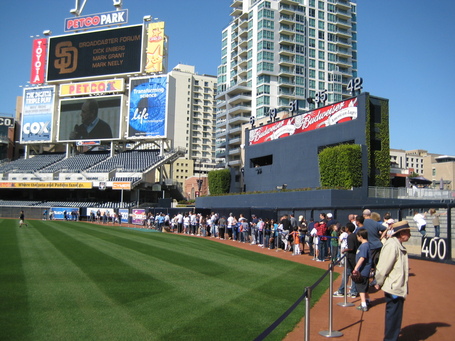 When we were about 3 people from the front of the line the pitching machine that was shooting fly balls into the air ran out of batteries.  I know what you're thinking, "Pitching machines take batteries?"  I know, right?  Who knew?  Well apparently they couldn't find the cord so about 15 minutes later some dude just started tossing balls into the air.

I went first, grabbed a plastic giveaway kids glove and headed to the field, cocky as all hell.  First ball, cake walk.  Second ball, walk in the par-- it bounces out of my glove! WHHYY!?  I can hear Jon laughing and Dex tweeting away on his phone about it.  Ugh.  Third ball, basket catch.

Jon and Dex caught all of their balls.  Boy did I feel dumb.  At this point, I'm sure Dex wants me to tell you that Jon dropped a ball on the transfer.  That's just the way Dex is, he wants you to feel bad about yourself.

My second favorite activity was calling a play on Channel 4 with Mark Neely.  I was the only one who wanted to do it, so I went up to the anchor desk and there was Mark in all his glory, with a fresh haircut and wearing his Sunday's best.  Let me tell you something about Neely, that guy is some kinda nice.  Very friendly and likeable guy.

After introducing himself, he shows me a list of about 8 plays that I can choose from.  I'll tell you right now I would be a terrible broadcaster.  I've got a really high pitched voice like Abraham Lincoln and an inability to think of words when I need them most.

I'm like "Mark, honestly I don't know what I'm doing, I'm going to go with the first one."  It turned out to be Kyle Blanks' inside the park home run.  Mark asks me if I remember it.  I answer "Vaguely". Every Padre game runs together in my mind, just like James Bond movies.  "Is this the one where George Lazenby snow boards off a cliff into a shark tank on the moon?"

Mark asks if I'd like to watch it first before I make the call.  "Nah, let's just do this."  I have no idea what I'm going to say, I'm hoping that inspiration hits me, planning will only make it worse.

Keep in mind that the only thing I know about this play is that Blanks hits an inside the park home run.  I'm on loud speakers so that everybody in the vicinity can hear me.

The clip starts to play...

The ball hits off the top off the wall in center field  Now I'm shrieking. .

I look up from the screen and the crowd is standing there quiet like when Marty plays "Johnny B. Goode" in front of 1950's teenagers in Back to the Future.

After the play I turn to Mark holding the microphone to him, "What do you think about all this Mark?"

He responded "well you definitely have the emotion and the enthusiasm."

That was fun.  As I was waiting for my picture to print a little kid came up to me and told me I did a great job. Thanks kid, if only Dex was more like you.