If you're just joining us, read Part 1 and Part 2 first.

If you've ever been to a live studio audience for anything, there's always a few people that they send out beforehand to get the crowd riled up. They throw out t-shirts. Do a lot of hootin'. A fair amount of hollerin'. Etcetera. Here's a photo of one of those guys at the Town Hall Meeting

Ignore the bored looking dude on the cell phone, scanning the crowd for his friends. I know this isn't that great of a photo, but it's the last one I have on my camera from the evening, therefore, up it goes.

After the crowd was sufficiently psyched, the front officers took their spots and the event really got under way. I pulled out my trusty softcover moleskine, extended my old reliable Pilot G2 and began licking the tip furiously, ready to take notes.

"WTF are you doing?" jbox asked.

"I'm getting my notes ready," I replied.

Jonny Dub squirmed a little in his seat. "All that licking is really distracting."

Let me start by saying that Jeff Moorad has really sleepy eyes. From 15 or 20 rows back, it was really difficult to tell which direction he was looking. Also, his voice is low, slow and methodical. That, combined with the fact that he's very powerful, meets lots of people and could be understandably forgiven for not getting names and details right all the time, makes him a little bit difficult to follow, but mesmerizing.

Case in point: Moorad started off by asking if Dan from San Marcos was in the stands. I could've sworn he was looking in my direction when he said it. My name begins with a D and I'm pretty sure I told him I used to live in San Carlos, so I thought he might've been speaking to me. I was falling under a spell.

I jabbed jbox with my pen. "I think he's talking to me. I'm going to raise my hand and yell."

"What? You're not Dan from San Marcos. Keep quiet."

I shook myself a little bit as the, presumably, real Dan from San Marcos raised his hand and yelled from someplace behind us. I laughed and wiped my brow with relief. "I thought he was talking to me!" I said nervously. "Didn't you guys think he was talking to me? His words were like honey. Who knows what I might've done if I hadn't snapped out of it. It was kind of sexy, right?" JBox shook his head at me. "omg you are so gay."

Jeff Moorad then continued by saying he wanted to talk about three things.

JBox gasped loudly. "OMG, did he just say 'women'? Write that down! It's like Moores all over again!" 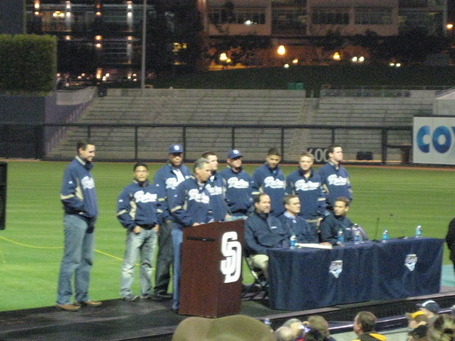 I missed the other two things that he wanted to talk about. I think maybe one had to do with legacy. Maybe the other was the idea that they weren't going to take any profit from the ball club. Something else about wanting to put together the best franchise in all over sports. My note taking utensils are amazing. My notes: lackluster.

The Q&A started and a bunch of old people stood behind Pad Squad Andre, who was manning the mic.

The first guy had something that looked like a rolled up blueprint in his hands. "I want to show this to you, Mr. Moorad. Will you look at this? I want you to see it."

I whispered to jbox, "Moorad's sleepy eyes. This guy doesn't realize they're open."

"I will look," Moorad said, his voice booming.

The "blueprint" revealed itself to be an undistributed Budweiser poster from 1984, proclaiming the Padres the world champions.

The next person asked a question that I missed. Jed Hoyer answered it though.

The next several questions were a little bit of a blur. The common theme being a little bit of passive aggressiveness. Somebody's catching depth question was coupled with the suggestion of playing The Boys are Back in Town by Thin Lizzy. Another person asked when we're getting an All-Star Game. One woman said that they better get a move on because she wasn't "getting any older" and wanted to see a championship before she died.

One guy - 50ish, wannabe "cool" dad sort of look about him - asked Jed Hoyer how tall he is and if he was old enough to vote. "Wow," said everybody in San Diego in unison while all shaking their heads in disbelief at cool dad. "What a dick."

"No, but seriously," said the cool dad. "My real question is BLAH BLAH BLAH." I missed the "real" question because I was busy writing the word "asshole" in my notebook in big block letters. Hoyer, to his credit, gave a perfectly acceptable vague answer to some other question that I'm pretty sure wasn't asked at all while mentioning something about gray hairs.

After that, Buddy Black spoke briefly and then reintroduced several players. Of the group he introduced, none of them, to my recollection had been arrested, caught saying something ridiculous in public, or been known to be anything too distracting. Chris Young, the de facto clubhouse leader stood and said a few words. It was about then that I had to leave.

On the way out, I grabbed two more hot dogs, an Adrian Gonzalez figurine, a Padres clock and a calendar. There's probably something symbolic about giving those three things away in particular. Adrian Gonzalez, your days are numbered as a Padre. The clock is ticking to produce a winner. Something. But I can't think of it right now. 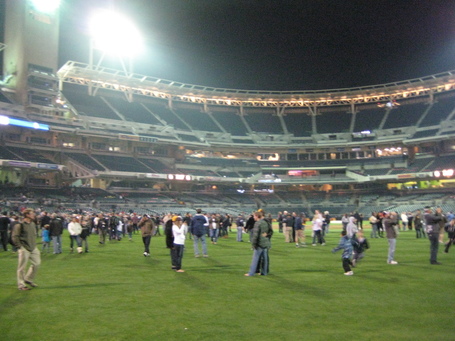