How do you let parents bring kids to the game and still see the game?

Share All sharing options for: How do you let parents bring kids to the game and still see the game?

Here's an idea that I pitched to Mentor. I know we got some youngies on the blog. Youngies feel free to skip this.

So those are some background facts. Additionally, it's important to note that the Padres graciously try to cater to peeps like me by offering a playground for the people who like to go to baseball games, but also have kids. It's a nice setup where the playground is right near several picnic tables and a grassy area that's sloped so you can watch your kids while at the baseball game.
That said, here's another background fact:
So, I'll take the kids to a game and I'll sit on the grass, but I have to watch my kids and I'll end up sitting next to another parent, and this visual aid is what happens:
Visual Aid 1 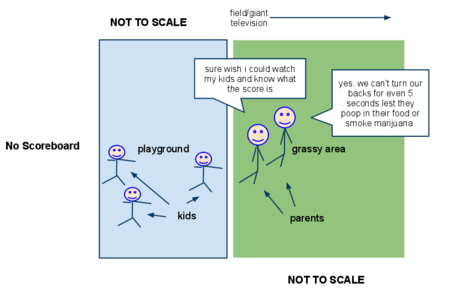 I think some of you know where I'm going with this.

The most comfortable/effective place to watch your kids play on the playground actively forces you to look in the opposite direction of the game and/or any information regarding the game. I find myself not knowing what's going on in the game, especially on crowded days, not because my line of sight would be impaired, but because I'm forced to actually look in the wrong direction to pay attention to what's happening.

My solution. Add a miniature scoreboard on the opposite side of the playground so that parents who are in that area, watching their kids, can check in on the current game situation. 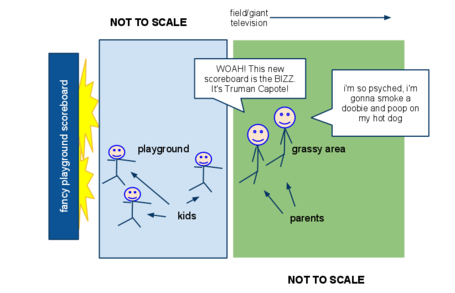 This way, if I want to do my American Duty as a parent and watch my kids, and still fulfill my American Duty of watching me some baseball, or if I just want to be able to know when Adrian Gonzalez Orlando Hudson is up to bat, there will be another point of reference that I can glance at without having to completely turn my back on the kids.

Also, a big criticism I have of Petco Park is that there is so much other stuff to do at the park that you don't actually experience the game itself. Depending on the features of the scoreboard, you're at least tuned into the situation and you have a better idea of if you should get back to your seats or if the game is so out of hand that it's OK to just chill at the playground for a while.

So there it is. An elegant solution that not only keeps the parents (and potential kids) more involved in the game, but also eases fears of losing a child because you were too busy watching Miguel Tejada Cameron Maybin wow the crowd.