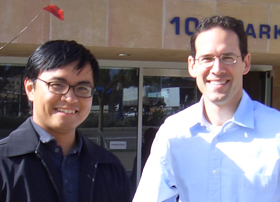 It's official, Paul DePodesta was lured away from the Padres by one Richard "Sandy" Alderson. He now joins the Mets organization as Vice President of Player Development and Amateur Scouting

"I am thrilled to reunite with Sandy during this exciting time for the Mets," DePodesta said. "I know firsthand the type of vision and leadership he brings to a franchise. This is a tremendous opportunity to help develop a winning culture for the Mets and our fans."

This doesn't surprise me at all and let me tell you why.

Alderson promoted DePodesta to Executive Vice President in the Padres Organization reporting directly to him, the CEO. The reporting structure caused tension in the organization as he was obviously Alderson's favorite. After the sale of the Padres and Alderson's resignation there didn't seem to be a place for DePo. Over time he was mysteriously distanced from baseball operations. Instead he became involved in the business aspects of the team, a learning experience that he claimed to enjoy but one wonders.

Baseball's boy genius was now engaged in ticket and beer pricing. Not to say that these business items aren't important but they seemed beneath him and didn't make full use of his talent and his Beautiful Mind. Alderson is again giving him the opportunity to be involved in baseball and that's not the kind of opportunity that you pass up. With Alderson in charge DePo will presumably again have free reign of his future and his work within the team.

For their part the Padres I imagine are somewhat relieved to be paying one less Executive Vice President salary. It doesn't hurt to free up a little space in the kitchen where at one time too many cooks fought over recipes, ingredients and adoration of the chef.

Personally speaking Paul was a really nice dude and always friendly to us when we'd bump into him. He even bought us lunch at the Tin Fish. We always figured we'd return the favor some day but have managed to avoid him so far.

It seems like just yesterday when he promised us in our epic 3 Part Interview with him that he'd never leave:

Honestly, on both a professional and personal level, I really couldn't imagine a better scenario. I have a hard time believing I would ever leave. I'll put it that way.