Which Padres were Military Veterans?

Share All sharing options for: Which Padres were Military Veterans?

So over Veteran's Day weekend I was trying figure out all the Padres players who served in the Military. Originally I was going to include players, coaches and Minor Leaguers, but that became too much.  Instead we'll just stick with Major League players.

If you can think of anyone else feel free to contribute to the list so that we can honor their service.

Also it's worth noting these other Padres employees that served.  Roger Craig was a Korean War Veteran.  Jerry Coleman, Tony Muser and Sandy Alderson were Marines.  Dick Freeman was a Naval Officer.

Also, Dick Dent (who served as the Padres trainer for over ten years in the 1980’s, was selected as the trainer for the 1984 All-Star game and went to the WS with the Padres that same year) was a decorated US Army infantry officer in Vietnam and Cambodia in 1969-70. He was awarded the Combat Infantryman’s Badge, an Air Medal and the Bronze Star w/ two oak leaf clusters - indicating two more awards of the same medal (i.e., 3 Bronze Star awards).

Thanks to the San Diego Padres, the Major League Baseball Alumni Association, Baseball Reference and Gaslamp Ballers texpadres, padres4life and strummer for their help.

Here is the list of all Major League Baseball Military Veterans sent to me by the Padres that are listed on the Honor Wall at Petco Park. 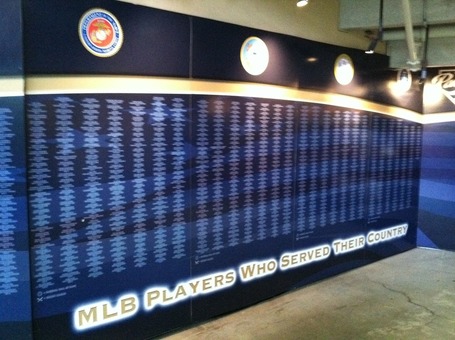