Walking into AT&T Park on Friday was a shock. A frenzied sea of orange and black swept us into the park with its current. As we were spun and twirled we would look for other ship wrecked Padres fans. There weren't many. Each time I'd see a Padres fan we'd exchange a nervous look. What were we in for? As we climbed into the life boat of our upper deck seats we floated in relative safety above most of the chaos.

From the second to top row along the third baseline, every ball hit to right field appeared to be out of the ballpark and into McCovey Cove. The only two balls that actually left the park were those hit by Padres Adrian Gonzalez and Matt Stairs. With each home run the crowd was settled momentarily like an antacid plopped into an ulcerated stomach. Relief.

Later Heath Bell let the crowd back into the game. It was the loudest ballpark I'd been in since the Padres 1998 season in Qualcomm. Fortunately poor base running by the Giants allowed the Padres to escape from any possible comeback and capture their first must win game. The few Padres fans in attendance held their head high, but dared not taunt the billion Giants fans.

On Saturday I attended the day game by myself. I wore my '84 Padres cap and my Padres Stand Up 2 Cancer shirt because I had purchased a Standing Room Only ticket and planned to stand the entire game. I found a place to stand nestled between a recycle bin and an old Asian man just to third base side behind home plate. I had a good view of the field and watched Barry Zito walk in a couple runs as fans around us booed their own pitcher. 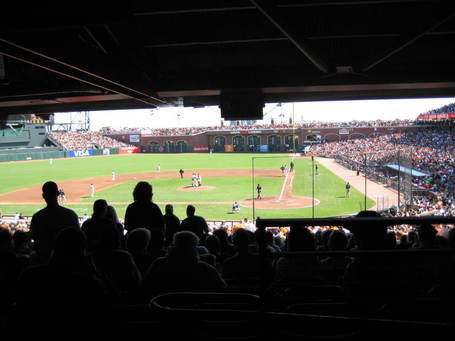 Giants fans tried to squeeze in front of me and I jockeyed for position to keep a good view of the field. I took countless elbows to the gut from the old Asian man and many dirty looks from Giants fans who walked in front of me. After 6 innings something magical happened...

From the field level seats I saw a figure approach clad in a Padres zip up. It was Padres President Tom Garfinkel. I called to him as he walked past me. "Who you here with?" he asked. I explained that I was alone. "Follow me" he said.

A moment later I was seated with Mentor and Jeff Moorad in the front row behind first base. I was Cinderella offered a glass slipper. 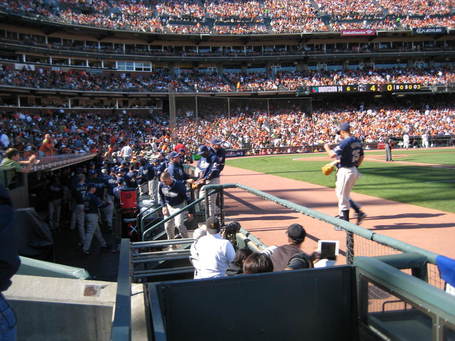 We encouraged Padres pitchers as they traveled to the bullpen and cheered the remaining players with each great play. It was awesome.

The Giants ramped up their sound system after the 7th inning stretch and started pumpin "Don't Stop Believing" by Journey. As the song approached the chorus, the ballpark camera focused in on Steve Perry, the lead singer of Journey, who was in attendance. Oddly enough we all looked at each other in disbelief. No one quite expected that cameo appearance.

With an inning and a half to go, I was invited up to the Padres suite. In the suite were food and drinks aplenty. You couldn't swing a cat without hitting a Padres Vice President, executive or honored guest. I didn't have a cat, so really that's just speculation. 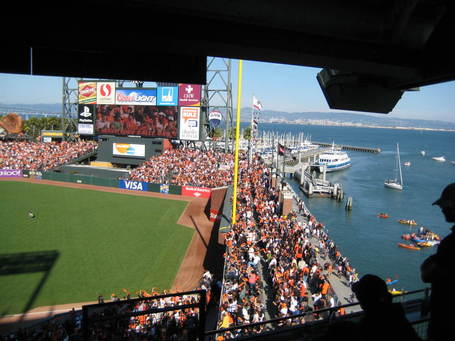 We held our breaths in the 9th until Miguel Tejada turned a double play that ended Bell's shaky outing and the game. Oh, sweet victory. Excited I told Mentor, "I think we might actually do this!" he responded "We will do this!" I high fived, shook hands and hugged everyone in sight. It was so nice of them to welcome me into that once in a lifetime experience. I exited the park with a big smile on my face and took the insults from the Giants fans with pride. 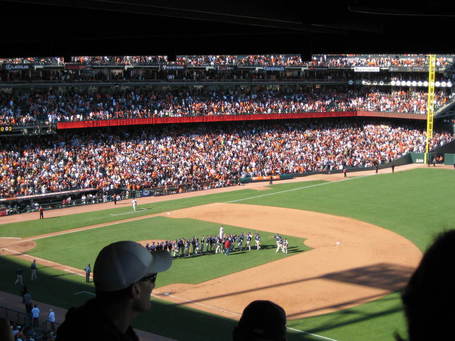