Somebody buy us this Padres 1984 NL Champion Ring

Share All sharing options for: Somebody buy us this Padres 1984 NL Champion Ring 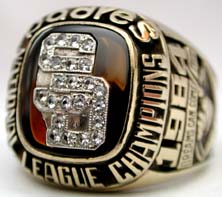 It's times like these when I wish we had a large blog budget. Dex and I would totally buy this ring and trade off wearing it to all Padres events. Maybe at these events we could charge a dollar to allow fans to kneel before us and kiss the ring in an attempt to pay it off.

Also, I think I prefer that it's a salesman's sample instead of a ring that actually belonged to a player. It's less depressing when you don't have to think of the player who was so desperate and down on their luck that they needed to sell it.

This handsome 1984 San Diego Padres "National League" Champions Non-Gold Ring is a *RARE* Salesman's Sample! Ring weighs 30-grams, is approximately a size 11.75, and was made by Balfour. (Since this ring is non-gold, it cannot be resized)