If you've never stood next to Tom Garfinkel, he can be an imposing figure, if you yourself are 5' 7.5". That being said, it was 6'1" jbox who was nervous about walking over and saying hello.

"He looks busy eating that hot dog," jbox said quietly as we tried working our way through the crowd.

"Shhhhh! What if he hears you?"

We made our way, shyly, meekly and said hello to Mr. Garfinkel. He was surveying the crowd while munching on a hot dog.

I opted for the handshake, making careful note of whether he attempted to turn my wrist or not. He did not. Instead, he gave me a firm handshake and a nice little shoulder pat while introducing himself to Jonny Dub.

He seemed genuinely happy to see us and offered hot dogs from the tables while admitting that he was having a bit of dinner himself. He went so far as to get me a hot dog himself. Here's photographic evidence: 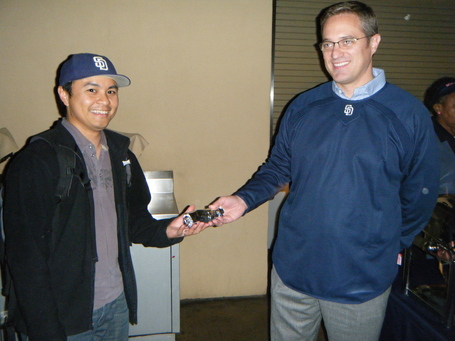 Now, see... There's a certain ridiculousness when one has reached the point in one's life where one is staging photos of one's self receiving sausage products from the president of one's favorite baseball club. Is this what I was expecting to do with my life at this moment? Why would I have thought this was a good idea? Is this good marketing?

In any case, Mr. Garfinkel mentioned that he was disappointed with the last photo we had of him. I'm not sure sure that this new one is any better.

"I have to tell you guys," he confided between bites. "That last photo you had. It was the jacket making me look that fat."

I tried hard to avoid looking at his belly. "Oh no, sir. You're not fat."

"That's what I'm saying. It was that jacket. It was doing something weird to make me look like... so disgusting."

I again tried hard to think of something to say that wouldn't make him feel bad. I looked over his face quickly for traces of chubbiness. Was he fishing for a compliment? Was this a test?

"Anyways, don't be posting any photos of me eating this hot dog. I couldn't live it down. My wife said she laughed out loud when she heard the guys on the radio saying that I had lost weight. I can't be having dinner at the ballpark like this."

As we chatted, a few people made their way through the crowd to briefly stop and say hello (to Mr. Garfinkel). JBox noted how popular Tom is. I commented that Tom was like one of the cool kids and that maybe he should offer us a cigarette. He told us not to give into peer pressure and then offered us all menthol cigarettes from a pack of Newports produced from some previously unnoticed pocket. He eyed us carefully for our next action. We all turned him down. He hid the cigarettes again, smiled wryly and nodded. Another test passed!

NOTE TO MRS. GARFINKEL: Tom Garfinkel did not actually offer us menthol cigarettes.

After chatting for a good while, we acted as an impromptu entourage and walked with Mr. Garfinkel down to the stands.

Along the way there, we ran into Pad Squad Andre who chatted with me and Jonny Dub while jbox continued talking to Mr. Garfinkel.

Pad Squad Andre is sooooooooooooo jealous of us. Used to be, back in the day, Pad Squad Andre was one of the few Padres people who would even acknowledge our presence. Now we're Tom Garfinkel's temporary entourage. It drives Pad Squad Andre mad with jealousy and we're always getting little snide remarks now.

NOTE TO PAD SQUAD ANDRE: You wear jealousy like an ill fitting sweater. It is not a flattering look on you, girlfriend. Holler!

One nice thing we got was a picture of the new Pad Squad outfits. Pad Squad Andre was wearing the new gear, but he wouldn't let me take a photo.

"Open up your jacket," I said.

He resisted, claiming we would get him in trouble.

"Would you just open up your jacket and let me see your chest?"

"No," he whined while weakly slapping away Jonny Dub's groping hands. "I don't want you putting my photo on the blog!"

"It's not for the blog, you big sissy. I want to take a picture for myself to look at later when I'm alone with a glass of wine, listening to a Serge Gainsbourg record."

So we didn't get a photo of Pad Squad Andre. However, here's a closeup photo of the new Pad Squad shirts on a Pad Squadder who will remain nameless: 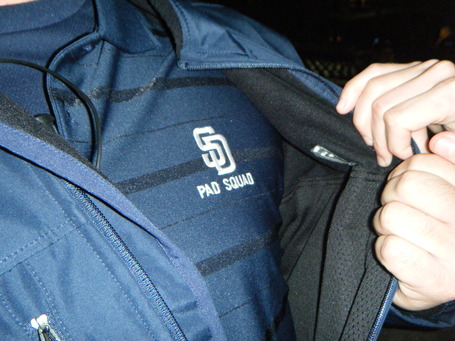 Pad Squad Brooke (Pad Squad Rookie of the Year 2009) was less intimidated and modeled the new gear happily in a photo with Jonny Dub. 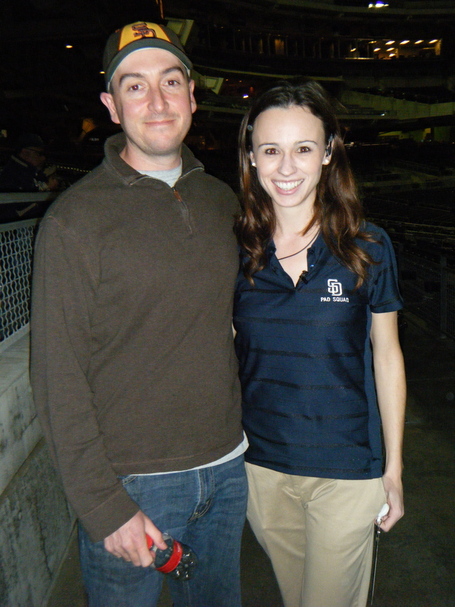 I like the subtle pinstripes. The trim cut is nice. Khakis works. Farewell Pad Squad jerseys.

IN PART THREE: When do we get to the f_ckin' Q&A? Seriously. WTF is up with dragging this out?