These Town Hall Meetings are great. That's the short review.

The Long Review: You get together with all kinds of Padres fans. You listen to good questions being delivered by interviewers more amateur than your friendly neighborhood Gaslamp Balloggers. You listen to answers delivered by men (and they're all men) who know how to sell to, persuade and reason with people much more savvy than you or me, dear reader. The answers are not usually anything more than sound bites and circle-speak designed to hypnotize with their vagueness. And yet, we delight. Oh how we delight.

Walking into Petco Park, I was handed the Season Ticket pricing for the year as if it were some amazing keepsake giveaway. I am not in the financial position to make such a commitment at this time so I folded it up and placed it delicately into my back pocket where I hoped to forget about it until much later. Maybe after the jeans I was wearing made it through the wash and the pricing document came out transformed. A linty, pink and blue clump of a relic from the evening.

NOTE TO TOM GARFINKEL: Instead of just the season ticket pricing for these events. Print out a few thousand agendas and letters from the president. I may be nothing but a trick to be turned, but I at least like to feel special. Also, people would be much more likely to hang onto such a thing and not let it get run through the wash.

Walking over to the Park from work (near Horton Plaza), I found myself getting tired. Feet sore. It was definitely preseason. Once I got into the park, I saw most people opting for the escalator as opposed to actually taking the stairs. Pussies, I thought and, with my REI backpack bouncing behind me, I bounded up the stairs,  three at a time, despite my weariness. I imagined the people on the stairs watching me thinking, Oh to have my youth.

Most of the people around were buzzing about what they were going to be "meeting" about. I overheard one college aged guy whisper something to his friend, who responded, "Yeah... You know what this is? Marketing. I get the feeling we are getting sold to right now. Keep your friends close and your wallet closer!"

JBox and Jonny Dub were already at the park and walked over to meet me. Both were in their brown and mustard hats, trying to make some sort of quasi-political statement. They snorted at my blue home cap.

I didn't arrive early enough to see all the players doing autographs, but I did catch a glimpse of Kyle Blanks who was finishing up chatting with the fans while his handlers were attempting to pull him away before somebody were to say something that triggered his 1/8th ogre, at which point, it would become extremely likely that he would literally eat somebody. Literally. 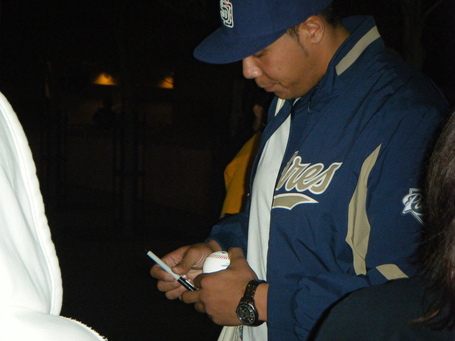 I was hungry something awful and jbox and Jonny Dub let me know that there were plenty of hot dogs to be had for the price of free. Standing near the hot dogs was none other than Tom Garfinkel eating something wrapped in foil! We considered elbowing our way through the crowd to get a closer look...

IN PART TWO: Will our heroes actually speak to Tom Garfinkel? Will he speak back? What was he eating under there? OMG. Did you say underwear?