An Enchanted Evening with Tom Garfinkel

Share All sharing options for: An Enchanted Evening with Tom Garfinkel

Wow that was a crazy good time we had with Padres President and COO Tom Garfinkel.  That guy knows how to do a meet and greet.  He knows how to make a couple girls feel special.

Man we did it all and met everybody:  Jeff Moorad, Kevin Towers,  Jenny Cavnar, Corey Brock, Pad Squad Andre, Luke Yoder, the president of Kyocera... everybody.

We were on the field, in the clubhouse after the game and in the press booth. We were also offered food at every turn.

We talked about everything. He told us "the plan". We were too dumb to follow or remember it. though, but  we're pretty sure there is a plan and we'd tell it to you if everything wasn't off the record.

That Tom Garfinkel is some kinda good guy.  We were worried that he'd be so nice to us that we'd do his bidding forever and ever.  We had reason to worry.  He wins!  No more criticism from us.

We waited out front of the ballpark offices for a minute, not quite sure if we'd recognize Garfinkel but we were confident that he wouldn't recognize us.  We should have planned better and swapped digits.  Suddenly Dex's phone rings, it's Tom.  How'd he get his phone number?  When you're the COO of the Padres, I guess you have your ways.  It's best not to ask too many questions.  He led us upstairs, within seconds we're walking into Owner Jeff Moorad's office.  Suddenly we're regretting all the beard jokes.

Moorad is chatting with some other fans, showing them his game worn Willy Mays jersey that's hanging on the wall along with other baseball memorabilia.  Moorad and Garfinkel start sharing stories about their recent trip to the Hall of Fame.  Moorad knows everybody.

We went back to Tom's office, Tom talked straight to us but most everything we talked about was off the record.  It was easier that way since this was just a meet and greet rather than anything formal.  He offered to do an "on the record" interview at some point later, which was cool.

We get going again and we're walking through the bowels of the ballpark, a few doors open and to our surprise we walk out on the field.

Of course the minute that we step foot on the field, there's Pad Squad Andre, we can't get away from that guy!  "Don't bother us Andre, we're busy!" 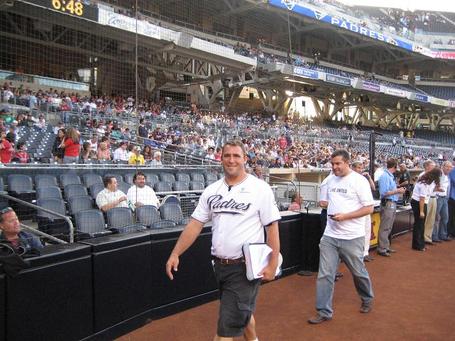 We stood on the field as they threw out the ceremonial first pitch and a Coastie sang the National Anthem. 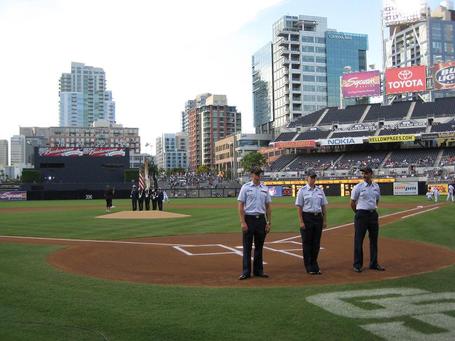 We took a tour of the batting cages.  Had dinner in the Dugout Restaurant, then sat behind home plate for a few innings.  A truly awesome experience, seeing the movement of the ball and hearing it hit the catcher's mitt was something I never thought I'd see from so close.

Next we went up to the upper deck where Tom gave away those very same tickets to three different families.  The families were thrilled. 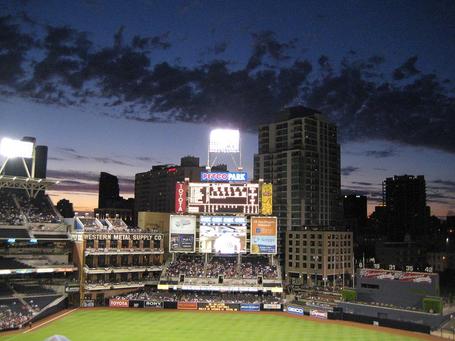 Then it was off to the press level where we peeked in on all the writers.  We spotted Jenny Cavnar texting so we asked if we could go say hello, which we did.  That's when we also spotted Corey Brock and met him for the first time. 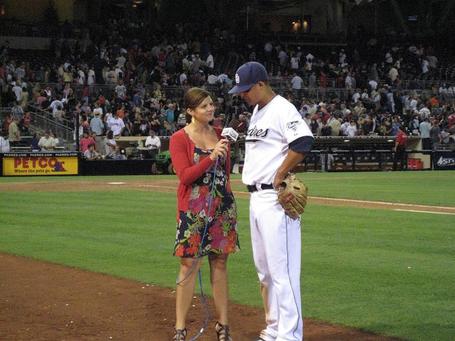 Kevin Towers was walking by and Tom introduced us as the "Gaslamp Ball-busters".  Towers says "so you guys are the ones who talk about the players out on the town."

We spent the rest of the game watching from behind first base, more great seats.  We were offered food every few seconds, being wined and dined is the best.  We felt like the Bachelorette.

Wigwam at the Ballpark

Earlier in the evening we were talking about how sick we were of hearing Gary Glitter, Zombie Nation and the rest of the Jock Jams soundtrack over and over again.  Tom seemed open to the idea of mixing the music up a bit, a former club DJ himself.

Tom kept asking us, "Okay but if there's one thing you could change right now what would it be?"  We were saying crazy stuff like "We want to stand up on top of the batter's eye between Gwynn and Garvey's numbers."  He was like "No you're thinking too big, something like a song you would play at the game, what would it be?"

We told him about our idea for Bob Dylan's "Wigwam" as a post game song.  He wasn't familiar with it but apparently took note, because the second the game ended Tom looks at us and snaps his fingers and Wigwam starts playing on Petco Sound System.  Surprised the hell out of us.

The song was cut off by the PA Announcer thanking the crowd, so Tom sends off another message on his phone, snaps his fingers and the song is played in its entirety.

Tom was pretty sure the song bombed and was too slow but yet couldn't stop humming it while walking through the ballpark, I think it's growing on him.  We stand behind it.

On the way out we walked through the Padres Clubhouse, saw Edgar eating his dinner, Brian Giles (semi clothed) at his locker, Jenny again doing some interviews.  Said "hi" to Marty from XX1090, she smiled but had no idea who we were.

Then we went to watch some youtube videos in Tom's office before we called it a night.

Thanks to Tom Garfinkel for being such a gracious host!