Rawlings about to introduce safer batting helmet, baseball players may be too vain to wear it

Share All sharing options for: Rawlings about to introduce safer batting helmet, baseball players may be too vain to wear it

It's about time that a real protective baseball helmet was introduced.. There is no reason that with today's technology that guys like Edgar Gonzalez should suffer a head injury due to an ineffective helmet. Edgar Gonzalez still feels dizzy when he lies down and it's been three weeks since his face to face meeting with a 93 MPH fast ball. Check out the FSN Sports Science video on the above link where they test the old helmet and find that it only reduces impact by 30%.

Thankfully Rawlings introduced the S100 helmet, named because it can withstand a 100 MPH fastball. 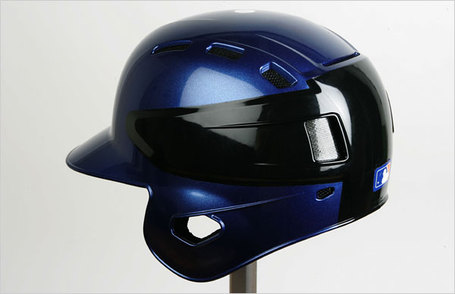 Looks like every other batting helmet you've ever seen right? Maybe a bit bigger and it has two ear flaps, so it doesn't go flying off on contact.

Some baseball players are so vain that they refuse to wear it. Yes we're talking to about you Jeff Francoeur and Mark Teixeira.

"No, I am absolutely not wearing that," Mets right fielder Jeff Francoeur said with a laugh after seeing a prototype, as if he were being asked to put a pumpkin on his head. "I could care less what they say, I’m not wearing it. There’s got to be a way to have a more protective helmet without all that padding. It’s brutal. We’re going to look like a bunch of clowns out there."

First of all is just a little bigger, it's not like wearing a pumpkin on your head. Second, baseball players should never be giving anybody fashion advice. With their decade old taste in mullets, necklaces and double breasted suits. Third, Francoeur already looks like a clown without the helmet and now he's acting like one by not being a good role model.

Gonzalez is not among them. "After this happened to me, I would wear anything," he said. "I don’t care how goofy it is, as long as it could help protect me."

David Halstead the technical director for the National Operating Committee on Standards for Athletic Equipment says:

"Major league players do not play with a helmet that meets any standards," he said. "It’s remarkable to me. Once the earflap is removed, it can’t be certified."