Harry the Heckler has heckled just about everything that walks or crawled at one time or another. He's been sitting in the left field of Padres ballparks since the beginning of time and he was kind enough to answer some questions for us.

What are the top 3 things that go into a good heckle?

Wait for the crowd noise and stadium music to die down. Yell very loudly. KEEP IT CLEAN.

Keep it Clean. Never curse or use four letter words. Don’t talk about the players mother or his wife and kids or his girlfriend. Saying something funny is a lot more effective, especially if you can get the crowd laughing at the player. I don’t drink beer at the game because I don’t want to become known as a drunk heckler or say something inappropriate.

Never heckle your own players.

When your heckles are not living up to your expectations, what keeps you going?

What's the most interesting thing a player's bribed you with to not heckle him?

Opposition players have given me dozens of game used autographed bats over the years in exchange for me laying off for the series. My best are the ones Brian Giles has given me, both when he was a Pirate and after he came here. Another of my favorites is the second one given me by Lance Berkman of the Astros on which he inscribed "to the best heckler in the league, well, the loudest anyway."

Have other San Diego fans ever tried to get you to sit down and be quiet?

Many fans have complained about me over the years. They get moved.

Do the Padres tend to approve of what you do?

I believe they do. The Padres players have given me many dozens of autographed bats, balls and lots of other stuff over the years, they show me on TV all the time and talk about me positively. The outfielders quite often throw me a warm up ball during the game so I can give it to a little kid.

Have you ever been heckled? Is it a bitter pill to swallow? 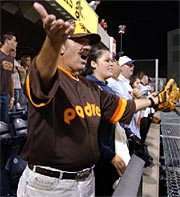 Sure, it’s all part of the game. I tend to work with it and turn it back on the person heckling me or my boys on the field.

Do you root as well as heckle? Do you cheer for the boys or do you save your voice for heckling the opposition?

Of course, I’m up high fiving up and down the aisle with everybody when we play good. And yelling encouragement to my boys if they miss the play.

I always cheer for my boys, and I yell at everybody; opponents, umpires, who ever should incur my ire and wrath.

In general, do you feel Padres fans are active enough or are they complacent and rely too much on scoreboard cheers?

The Padres fans do a great job, but I think the wave is over.

Do you reprimand hecklers who are "crossing the line"?

I’ll ask a fan to watch their language. If they continue or other fans complain about them, I’ll go get security. I have had fans removed from the park before.

Do you believe that one of your heckles has affected the outcome of a game?

The fact that so many players have bribed me to be quiet, and the left fielders who have asked to be moved to play right field (Moises Alou) when they come here; I’d say yes, I have affected the game.

Have you ever taken threats from players seriously? Bonds threatened to kill you right?

No, most of the time it’s just them cursing at me or flipping me off and telling me what they would like to do to me.

Back around ‘01 or so, Bonds pulled his inner groin muscle on his right thigh on his first at bat running to first base. He was down below me in left field messaging his thigh with his hand when I yelled very loudly "Barry, you’re not hurt. You’re just using that as an excuse to play with yourself in public". His next at bat while running to first base he pulled the muscle completely and had to be helped into the clubhouse. Where, according to a clubhouse guy I know, he went ballistic throwing stuff around and cursing. The next night He came up to me and told me if he ever caught me away from the park he’d beat me to death.

What advice could you give an aspiring heckler?

Go to a LOT of games. The more the players see you and hear you, the more effect you’ll have on them. Do your research on players, their stats, what’s happened to them in media, the internet. Pay attention to what the player is doing on the field, at bat. Watch what he does and work with what you see. Use good judgment in what you say, it’s a FAMILY environment. If you do drink, keep it to a minimum otherwise people won’t respect you and you lose your effectiveness.