Bert Sugar has written a new book titled Bert Sugar's Baseball Hall of Fame. I'll do a proper review in the next day or two, but Mr. Sugar was kind enough to be interviewed about the Hall of Fame and his new book. If you're thinking of a Father's Day present for a baseball fan dad, then you don't need to read the review. It's highly recommended!

GLB: How many times did you go to the Hall of Fame to do research for the book? Do the security guards know you by name now?

BERT SUGAR: I lost count of the number of times I went in and out of the Hall of Fame (HOF). But each time I would find something new, something I hadn’t taken notice of before. Take, for instance, the two larger-than-life statues of Babe Ruth and Ted Williams that greeted visitors as they entered the Hall. One day they were there; the next time I went up, they were replaced by the "Character and Courage" sculpture honoring Lou Gehrig, Jackie Robinson, and Roberto Clemente. It was like that in other parts of the Museum as well with exhibits constantly changed and updated, especially in the section designated as "Today’s Game" where items of each team are displayed. And as for the security guards, they were more than helpful – along with members of the HOF staff – directing me, even when I looked lost (which was often) to some exhibit or other that I knew was "there," but wasn’t.

GLB: What's your favorite area in the Hall of Fame?

BS: There were several areas that could be called my "favorite," from the "Sandlot Kids’ Clubhouse" to the "Pride & Passion" exhibit to the movieola running the famous Abbott & Costello "Who’s On First" skit. But I particularly liked the third floor where, starting with fabric-mache figures of fans which greet the visitor at the top of the stairs, through the exhibits of various stadiums ("stadia" if you took your Latin), concessions, promotions and even mascots and renditions of "Take Me Out to the Ballgame" by such "singers" as Harry Caray, Liberace, Frank Sinatra and even Harpo Marx.

GLB: What makes the third floor your favorite?

BS: Why these third-floor displays are my "favorite(s)" is because they’re part of the "Fan Experience" – one I can identify with, having been a baseball fan all my life.

GLB: Did you make it down to the "secret" archives? Anything crazy/scary/weird that you saw?

BS: The HOF curatorial staff was very hospitable and took me down to the sanctum-sanctorium where there are as many baseball artifacts as there are on display on the floors above. After putting on white gloves, they allowed me to hold Shoeless Joe Jackson’s "Black Betsy" and Babe Ruth’s massive bat, put on various gloves worn by baseball greats, and walk around the room gawking at the other priceless items. One of the more unusual sights was the number of tobacco-related items that were in storage – such as a cigar humidor in the shape of a football given to Babe Ruth by Knute Rockne – which I guess, in the name of political correctness and the aura of anti-tobacco, are not on display in the Museum.

GLB: The book is just as much a history of baseball as it is about the Hall itself. What brought you to this project?

BS: I have always wanted to do a "history" of baseball, and what better way, I figured, to do so than to have that history illustrated by the artifacts of the game in the HOF. It was a natural "fit" – the game, its history and some of the most illustrative elements of the game and its’ players which can only be found in the HOF. And when I made the overture to the HOF, they were receptive to the idea, so the project took form and flight, in large part due to the cooperation of the HOF.

GLB: How did you connect with Bruce Curtis (photographer for the book)?

BS: Although I had never met Bruce, I knew of his work – which included several coffee table books on various museums, such as the Buffalo Bill Museum, as well as one on fly-fishing. And so, when he called me with an idea to do a book on, as I recall it, golf, I met with him and, fortunately, was able to turn his thoughts to one on baseball, which was my dream.

GLB: Several players got extra mention, with more detailed profiles and photography, including our own Tony Gwynn. How did you pick the players that you profiled? Should fans consider these players your own Hall of Fame cream of the crop?

BS: I profiled those players whom I thought best represented the period or the era in which they played. There is one player, however – if I must confess to a "druther" – whom I thought was more deserving of such a profile than any other: Honus Wagner. He is almost a forgotten great, remembered, if at all, as just being featured on the rarest of all baseball cards. But what most don’t know about him is that, in the initial HOF balloting, he tied with Babe Ruth for second-most votes behind Ty Cobb. He was that great and should be remembered as being more than just a face on the card, and so I guess I went out of my way to highlight him and his achievements.

GLB: What's your favorite spot in Cooperstown outside of the Hall of Fame?

BS: There’s so much to see in Cooperstown, from its quaint streets and shops to Doubleday Field to the magnificent Otesaga Hotel, that the town itself – a throwback to villages of yore – is a walking tour, one which almost makes the visitor think they’ve wandered into Brigadoon. The Baseball Hall of Fame is, of course, the centerpiece, but the village of Cooperstown, with its many other museums (like the Farmer’s Museum, the Fenimore Art Museum, and the Glimmerglass Opera) make Cooperstown a "must" for the whole family, not just the baseball fan. To visit Cooperstown is a trip back in time, one to be relished, not run through!

GLB: What would you say is a "can't miss" thing to see at the Hall of Fame besides the main hall of plaques?

BS: It all depends on the visitor’s point of view: their team preference, their remembrance of a given era or player, their feel for the history of an era. And for that fan who bleeds baseball, the HOF is hardly a one-day look-see. It takes time to take it all in and really appreciate how each display and exhibit mirrors a given time or player or team. There are several "can’t miss" exhibits, including "Diamond Dreams," the Women in Baseball room, which many remember from the movie " A League of their Own;" or the "Pride & Passion," The African-American Baseball Experience exhibit; or "Taking the Field," the 19th Century exhibit. But to single out any one of them doesn’t do justice to the totality of the exhibits, lovingly displayed and carefully arranged, all of which tell the story of our National Pastime. It’s a true baseball fan’s dream – and hopefully, one we capture in the book.

Thanks to Bert Sugar for taking the time to answer our questions! Bert Sugar's Baseball Hall of Fame is highly recommended! 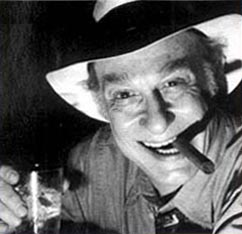