Share All sharing options for: Fox 5 promotes Chrissy Russo "Outfit of the Day"

Everybody is probably familiar with Padres Pre-Game roving reporter Chrissy Russo.  We interviewed her a couple years go. 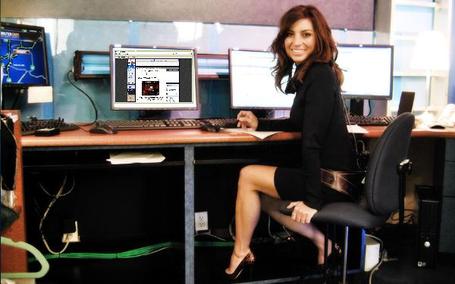 Get your eyes of Chrissy's legs!  Look at how I put Gaslamp Ball on her computer screen.

She is also the Weather Girl on Fox 5's morning news.  They promote her more than the show.  Have you heard the radio commercials?  "Chrissy Russo is HOT in HD"

I was just talking to this lady yesterday and her husband will not go to work until he sees Chrissy doing the weather.  He has to see what she's wearing or work just won't be possible.

We also get a ton of web hits from people searching google for "Chrissy Russo Short Skirt".  She's a San Diego phenomenon.

She even plays along with it, making statements like "The truth is that I've always worn skimpy bikinis and I probably always will"

Now Fox 5's website has Chrissy Russo's Outfit of the Day.  Pure Genius.  I'd like to see Channel 4 play up this angle some more.

I think this one is my favorite outfit so far: 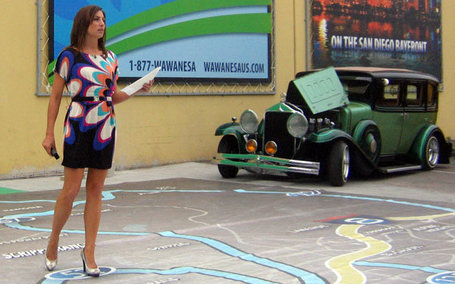