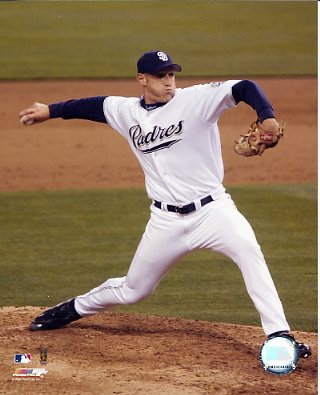 If you were a Padres fan in 2004, there was a brief period of time when you rooted for Jason Szuminski. I guarantee it. For those of you who don't remember, Jason was the first MIT graduate to play in the major leagues. In his first appearance in the big leagues he pitched a scoreless inning, which included a long fly out to Barry Bonds. Jason is also an Air Force reservist and threw out the first pitch for the very first Military Appreciation Night held at Petco.

By some weird twist of fate, we caught up with Jason and he was nice enough to do a quick Q&A for Gaslamp Ball:

JS:  I’m getting my MBA up at Stanford.  This first year has been a blast.  The classes are actually a lot of fun and my classmates are awesome.  I’m really glad I came.. now I just need to decide what’s next.  Playing ball I knew exactly where I wanted to go.. here it feels like there’s a million things I want to do and never have enough time.

GLB: What was your real college GPA?

JS: Good enough to get me drafted.  I’m glad the Cubs took a chance on a guy who got a C in thermo.

GLB: Does it piss you off, Ivy league schools giving out 4.0 like they were greenies in a minor league clubhouse?

JS: Seriously.  Do they even have exams?

GLB: How did it feel to get Barry Bonds out?

JS: It’s cooler looking back on it now.  I wish I had a longer stay in the bigs, but I got to go up against the best of all time, and I got him out.

GLB: Were you scared when Barry made contact? Me too.

JS: Yeah, yeah.  I thought it was going to drop for a Texas leaguer behind Khalil.  His popups go a little farther than most guys’.

GLB: Were you really the smartest player in baseball?

JS: I might have had a chance to be.  But I blew it when they got me with the left handed fungo gag.

GLB: Did guys ask you to fix their computers?

JS: They might have.  I’m not any good though.

GLB: Did you ever try to use physics to develop any new pitch or did you find yourself inexplicably bound by Newtonian physics despite understanding quantum physics enough to realize that it would theoretically be possible to indeed throw a ball directly through a bat?

JS: Dude, you almost made it through the interview without asking the physics question!  All I know is, fastballs don’t rise, explode, hop, jump, or speed up.  Sinkers are pretty good at breaking bats though.. and that’s almost like going directly through them right?

GLB: Did you hang out with David Wells at all? Any of the players? Got any dirt?

JS: Yeah, I hung out with a lot of them.  Wells jumped in with a bunch of us younger guys headed to dinner one night and then picked up the whole tab.  The Pads had a lot of big names that year and they were all really good guys.

GLB: Chris Young is often highly regarded because he went to Princeton, but seriously... I mean, right? Princeton? Not impressed, right?

JS:I’m sure he’s smart enough to know he makes more money than I do.  And he had the chance to go pro in two sports.. definitely impressive.

Thanks a ton to Jason Szuminski! Good luck at Stanford!