1984 was a special time for San Diego. I remember having the radio on everywhere I went back in 1984, listening to the Padres broadcasts during the Post Season. I clearly remember falling asleep as a game started on my radio, because my bed time was before the sun even set. Back in the day, you had to buy the Padres cable package it was the only way to watch the games on TV. The family bought the package for my grand parents every Christmas,they were the only ones I knew that had it.

The 1984 roster was the first that I had memorized from top to bottom. Last night during the game I tried to find out what they are all doing now, with surprising success.

Every kid at school had Cub Busters T-Shirts. I had a bumper sticker on my door that had a picture of an old beaten up baseball with the cover coming off that said "Thanks Padres we had a ball"

Some kids tried to imitate and study Steve Garvey's swing, me I studied and tried to copy his hair and his forearms. The forearms never took, but the hair... the hair equaled the Garv's toward the end of '84 and surpassed it sometime in the late '85.

Speaking of the Garv, I'll never understand why people want to unretire his #6. You could have made a case for it at the time, but it's done. You'd be doing a great disservice to the team and the city. He and his number are a part of history now, they belong to the ages. 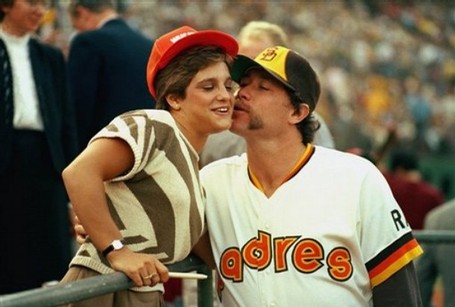 Who ya gonna call?

This poll is closed