Share All sharing options for: 1984 Padres: Where are they now? 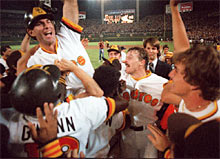 1984 Padres team will reunite on Saturday

Before the game the following Padres will be signing autographs:

I took it upon myself to find out what the 1984 Padres players are doing now.  I used Wikipedia when possible but sprinkled in a little bit of imagination.

The Union Tribune did the same thing as I did and I was able to get a few updates from them.

Revisiting the Padres of '84