It's been about a year since I told you guys about the San Diego tattoos I got that day and the GLB piece I'd be getting the next day. I got all three from a close friend who had been shadowing/ apprenticing under me. He's a tremendous artist but unfortunately when it comes to tattooing he- well, did I mention he's a really nice guy? Turns out that some people are just incapable of finding their touch with a tattoo machine in their hands and my boy Sheezy happens to be one of those who are way too timid and nerve-addled which resulted in me living a year of my life with three dubious tattoos that I finally got around to getting fixed today.

The first two are on my left hand: 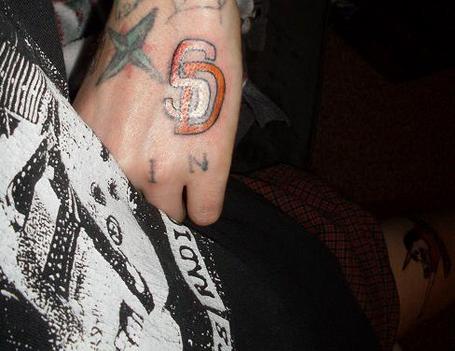 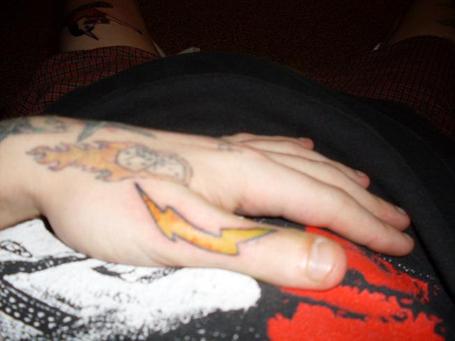 but I'm sure you already saw those in the (victorious!) game thread and are interested in one thing and one thing only. So, with no further ado, here it is: 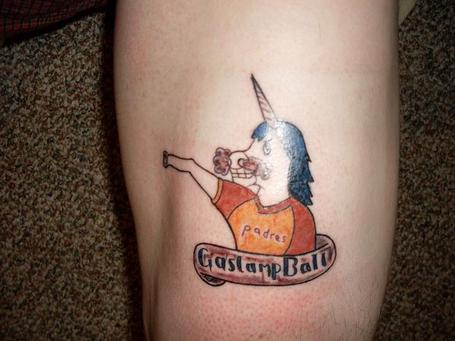 The pic looks kinda crummy due to both the freshness of the ink and my ineptitude at photography. The piece itself will look better once it heals; the redness of blood and swelling will dissipate and the graywashed areas that look way darker than they should be (banner, smoke) will fade out to subtle accents as opposed to how dark and distracting they are now. A couple of weeks from now when they're all healed up I'll have my homeboy Vinny bust out his lights, shades and cameras that cost more than my car- I'll put those up then but for now I figured I'd go ahead and post the shots I have since you guys have already waited long enough too long already...