Jon and I headed down to Petco Park for Padres Fan Day.  Dex as usual was too busy to hang out with his buddies.

As we walked through the gates all the ushers eagerly welcomed us to Petco Park.  I'm very skeptical of friendly ushers, this isn't their style but I think the message is clear, be nice to fans and pray that they come to games.

Seconds later Jon spotted Pad Squad Andre.  Jon and PSA talked but they didn't seem as excited to see each other as usual.  I wonder if they've had some sort of falling out.  PSA is all business with new Pad Squadders walking by, we waited to be introduced to his other friends, no such luck.

Moments later we bumped  into 2008 Pad Squad Rookie of the Year: Pad Squad Loxie. She had couple new Pad Squadders with her, Pad Squad Cassie and Pad Squad Suzie.  We chit chatted, told secrets, pinky swore and promised never to forget each other. 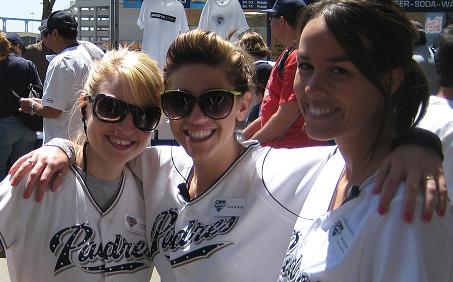 As we talked I noticed that Steve Quis and Jenny Cavnar were behind us at the Cox booth.   We introduced ourselves to Steve Quis, he was friendly and it was good to finally meet him.  He told us that we were the first fans to recognize him and Jenny. Other fans asked them to fix their cable.

I asked Jenny if she missed the moments so long ago when we shared a flight from Peoria to San Diego.  After much prodding and rephrasing the question several  times she finally broke down and admitted that she missed me. We talked twitter (look who got a mention) and blogging and then it was off to the Padres Garage Sale. As we walked away we passed Jane Mitchell, we proclaimed our love for her.

The Padres Garage Sale line was long but we couldn't find anything else to do so we battled a strange stench and got in line.  Once inside Jon shopped for yet another Padres Jersey.  We found a couple winners, but eventually Jon decided against a jersey and got a banner, an official cap and a couple wristbands for 16 bucks.  Not a bad deal at all. 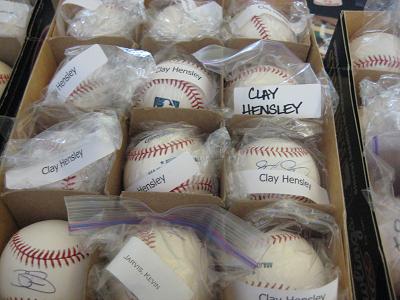 There was no shortage of signed Clay Hensley baseballs and no line for them.  I'm reminded that some good things happened in the off season.  I tried to buy some baseball pants but it turns out that thin dudes don't play big league baseball and nothing was going to fit me.  Nobody in the Major Leagues wears a 7 3/8's ball cap either.  As usual, I just don't fit.

On the way out we saw Mark Grant signing autographs and taking pictures so we jumped at the chance to get a pic.  Some guy asked Grant "How are we going to manage without Vasgersian?"  Grant said something like "We'll be okay". 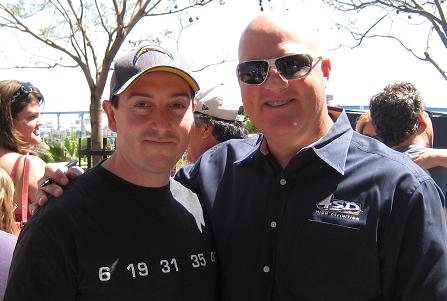