Padres don't like taste of their own medicine. Lose 4-5 to Phillies

I don't think this is medicine at all, I think it might be Syrup of ipecac, that loss totally induced vomiting.

Padres lose 4-5 to the Phillies on a walk off homer by Ibanez.  Heath Bell was unavailable today after closing something like 50 games in a row.  Padres coasted most of the game with a 4-0 lead and a Cabrera Luis Rodriguez throwing error followed by an Utley home run made the score 4-2.  Rollins hit a solo shot later to make it a 4-3 game.  Moreno blew the save in the bottom of the 9th. Some how the Phillies stole the Padres game plan. 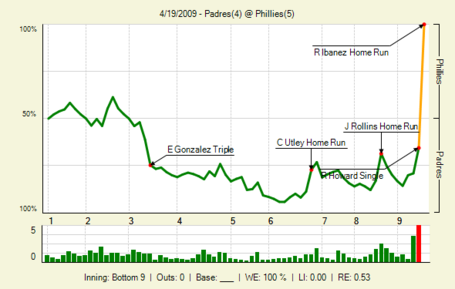 One more game against the Phillies tomorrow to try and take the series win.